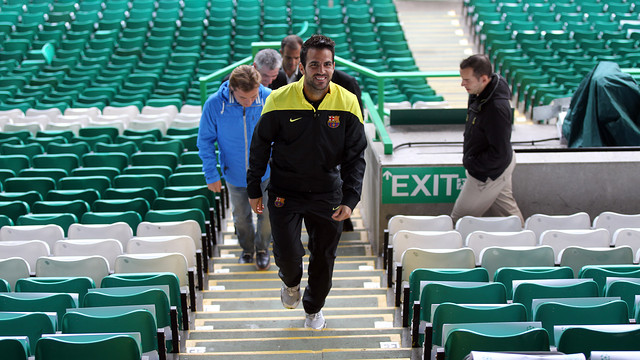 Last year’s 2-1 victory over Barça won’t soon be forgotten at Celtic Park. It was a reoccurring theme during Cesc Fàbregas’ pre-match press conference this afternoon as many of the gathered journalists asked questions regarding last year’s showdown. “We learned our lesson last year. It was a good game, but it got away from us because of small details and that’s what we have to try an minimise. We have to play with an attacking mentality,” said Barça’s No4.
[[CITA_1]]
For Cesc, these “small details” are “not committing fouls on the wings, or conceding corners, that’s where they are strong.” The midfielder expects Celtic to have the same approach as last season: “We think we know how they will play, and it could be that they will approach the game in the same way they did last year because it worked for them. We’re expecting a relatively similar game.” Cesc also said that Barça lacked “effectiveness” in the 2-1 defeat last year. With that said, he noted that Barça will “try to win without obsessing about last year’s defeat.”

“Coming to Celtic Park is always tough because of the fans’ enthusiasm, among other things,” said Cesc when asked about what it’s like to play in Celtic’s stadium. Making the task of winning more daunting is Leo Messi’s absence. According to the Catalan, “Messi is the best player in the world, he makes a difference, but he won’t be here and we can’t do anything about that.” He continued: “He’s the player who scores the most and gives the most assists, the rest of us need to take a step forward.”

The midfielder might be called on to play in the Argentine’s position tomorrow. “I’ve adapted well to the three positions that I play in. The most important thing is to win,” he said. “I’m in good physical condition, I have confidence, I know what the boss wants from me. I’m very confident and I try to give it my all,” continued Cesc. He also expects to “maintain this type of consistency throughout the season, to be in good mental and physical condition until the end.”

It was a good game, but it got away from us because of small details and that’s what we have to try an minimise