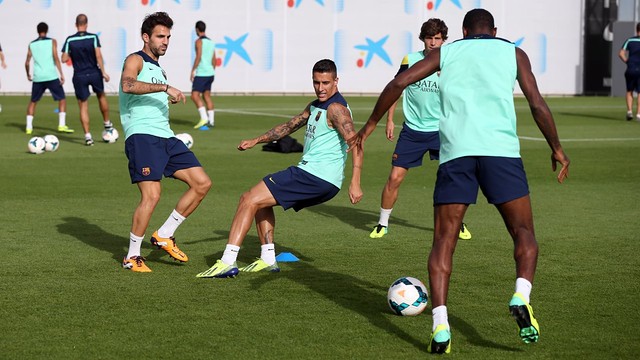 Cesc missed the game with Real Sociedad, but will be back this weekend

Gerardo Martino has named all 19 of his available players for the trip to Almeria on Saturday (18.00, GolT and Canal + Liga). The main change is the inclusion of Cesc Fàbregas, who was rested for the 4-1 win over Real Sociedad on Tuesday. With Mascherano already out with a hamstring injury, Martino will only have to drop one more name from his definitive squad.

Puyol back with squad

There was one final FC Barcelona training session before the players made the trip south. The venue was the Ciutat Esportiva and all of the players plus Carles Puyol were there, with the captain completing the full session.

The players were also joined by Roger Riera of the U18 team and Julen Arellano of the U17’s, who also joined the Thursday session.