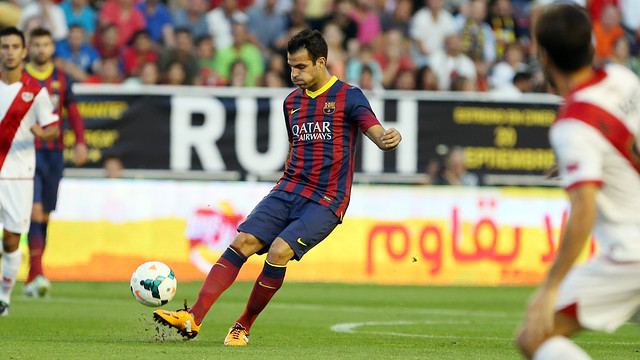 Cesc, pleased with the victory, highlighted the variants in play that Tata Martino brings to the team

Cesc is pleased with Barça’s convincing victory over Rayo Vallecano: “We’re really happy, these matches are really tough. They are afraid of nothing, they pressure you high up the pitch and they play well.” The midfielder went on to say that his team played better in the second half: “In the second half they were more tired and we managed to take advantage of that, but it’s always difficult for us to win here; they are difficult to beat.”

New options when it comes to play style

The Catalan midfielder also talked about the changes introduced by Tata Martino to Barça’s play. “Football is like this, it offers you variants and if you go up against a tough rival one day, on a small field and they press you … that’s what we’re working on with the manager,” said Cesc.

The youth academy graduate also touched on Martino’s policy to rest players: “It looks like he’s doing it with everyone, even the important players. We don’t like it, those of us who want to play every game, but it’s an intelligent approach and we’ll thank him at the end of the season.”

Martín Montoya and Víctor Valdés also talked to the press after the match. Here are their statements:

– “We knew that it was going to be a difficult game, Rayo are a team that fight, they maintain their pressure on you for the duration of the match. We were up to the task, we were at our level, we won and that’s the most important thing and now we have to continue working. This result gives us a bit of tranquility.”

– “We saw that the pitch was in poor condition, and we talked about the best way to address the issue. It was necessary to play long balls to avoid their pressure.”

– “Everything is the same, but it is true that we don’t need 20 passes to create a chance, sometimes we can do it with four or five touches. We’re not changing the system, we’re adapting it.”

– “It’s a pleasure to be in the starting team. I’m very pleased and I’ll try to take advantage of the minutes I’m given. I have to continue working.”

– “I talked it over with the manager, ‘Dela’ (De La Fuente), and we came to the conclusion that Roberto (Trashorras) would shoot down the middle (in the event of a penalty). He doesn’t usually go for the corners and perhaps he was surprised that I held my position in the middle of goal. It worked out well.”

– “I’m very satisfied with how things are going, the most important thing is that we’re winning matches both in the league and the Champions League.”