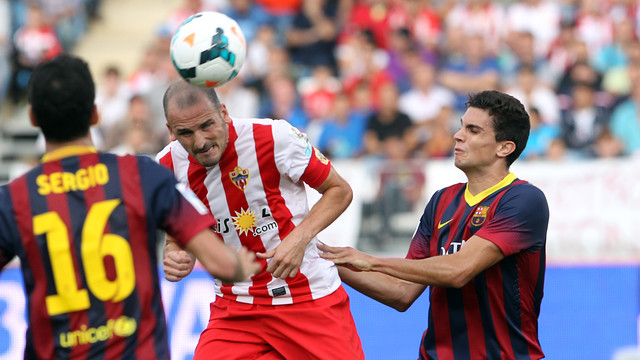 The team will train on Sunday at 11.00 at the Ciutat Esportiva. The session will be closed to the public and there will be no post-training press conference.

It’s not just about victories anymore, it’s about setting new records. FC Barcelona not only secured three additional points in Almería this evening but they also broke the Club record for the best start to a league campaign: seven victories from the seven opening matches of the season. Sergio Busquets declared: “We knew that we were level with last year’s record. We’re pleased [with the victory] and we want to continue to add to our record.”

The midfielder went on to say that “we played well at the start, and they did a good job pressing us. In the second half we had more possession.” The key to the match, however, was Adriano’s goals: “Our second goal gave us a bit of tranquility. We didn’t suffer and we controlled the game.”

The negative news from the game is undoubtedly Leo Messi’s injury. Barça’s No16 hopes that his team-mate will “be out of action as little as possible, he’s a very important player for the team. I hope he recovers quickly and well.”

Barça’s next match is away to Celtic Glasgow in the second round of the Champions League group stage. Busquets warned that “it’s a difficult ground and the atmosphere is fantastic.”

“I always try to do a good job when I play,” said Adriano when asked about his goal against Almería. The Brazilian went on to say that “our attack is always better when the right and left backs contribute.” He added: “The second goal gave us peace of mind and it worked out for us.”

“Nothing has changed. We have the same philosophy. There’s no debate within the dressing room.”

“We will try to win titles by doing the same things we’ve done in the past: Having the ball.”

“In the second half we saw the Barça everyone wanted to see.”

“We’re doing well, we’re improving. We got our win and that’s how you win league titles.”

“I’m happy with the victory. This is a ground where league titles are won.”

“I’m very confident in my chances. I want to bring security to our defence.”

“Piqué is a fantastic player, I’ve just started and I have a long way to go to be like him.”

“We won’t win if we don’t improve on what we did last year.”

“The first half got away from us, in the second we had more possession and we created the chances to win the game.”

“We’ve shown our competitiveness and we try to do things in the best way possible.”