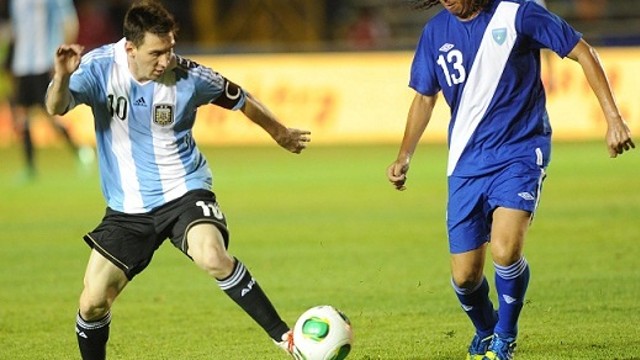 Other Barça players with international commitments

Barça B central defender Sergi Gómez will join team-mate Sergi Roberto in the Spain under-21 squad while Dongou is in the Cameroon squad alongside Song.  Young forward Toni Sanabria may also get a run out for Paraguay against Argentina.  Finally, David Babunski has been included in the Macedonia squad for World Cup qualifiers against Wales on 6th September and Scotland on 9th September.

This week, Barça manager Tata Martino is losing 13 of his first team players to international duty.  No fewer than eight will be away with Spain while Argentina, Cameroon, Brazil, Chile and Spain under-21’s will also have a Barça representation

Spain take on Finland and Chile

Victor Valdés, Jordi Alba, Sergio Busquets, Xavi Hernández, Andrés Iniesta, Pedro Rodríguez and Cesc Fàbregas are in the Spain squad to face Finland on 6th September in Helsinki in a World Cup qualifying game for Brazil 2014.  Spain currently lead Group I, a point ahead of France, with four games left to play.

That’s followed by a friendly against Chile in Geneva on Tuesday 10th, when they are likely to come up against team-mate Alexis Sánchez.

Meanwhile, Sergi Roberto has impressed Spain under-21 manager Julen Lopetegui enough to secure a place in the squad for two matches against Austria, in Graz on the 5th, and against Albania on the 9th in Logroño.

Argentina, with Messi, against Paraguay

Leo Messi will lead Argentina in a vital World Cup qualifier against Paraguay on 10th September.

Argentina is top of the South American group with 26 points, three clear of Columbia in second place.

Alves and Neymar with Brazil against Australia and Portugal

As host nation, Brazil has already qualified for the 2014 World Cup.  However, Alves and Neymar will be joining the rest of the Brazilian squad for warm-ups against Australia in Brasilia on the 7th and against Portugal in Boston on the 10th.

Alex Song’s Cameroon have a vital home match against Libya.  Cameroon head the group with a one-point lead over their visitors and have a chance to put some space between themselves and one of their main rivals for top spot.