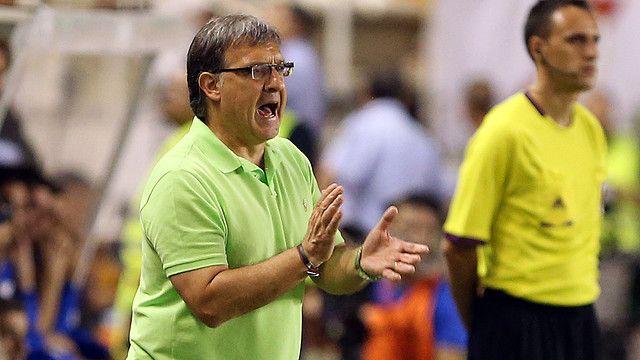 This has also been the best ever start to a season in terms of goal difference (14), with 18 goals scored and just 4 conceded.

Tato Martino’s side just couldn’t have made a better start to the league season, with five wins from five, and throughout the Club’s history, only four other coaches have matched the Argentinean’s great start- James Bellamy (1929/30), Terry Venables (1984/85), Louis van Gaal (1997/98) and Tito Vilanova (2012/13).

This is only the eighth year that Barça have managed five straight wins at the beginning of a league season, with  Marinus Michels (1972/73), Johan Cruyff (1990/91) and Josep Guardiola (2009/10) also achieving the feat – though not in their debut seasons as managers at the Club.

The winning run has also given Barça their best ever goal difference stats after the first five games. With 18 goals scored and just 4 conceded, Barça have a goal difference of +14 – one better than Belllamy and Guardiola’s record. Venables, Van Gaal and Vilanova chalked up +11 in their great starts, whilst Michels recorded +8 and Cruyff +6.

Two wins off all time record