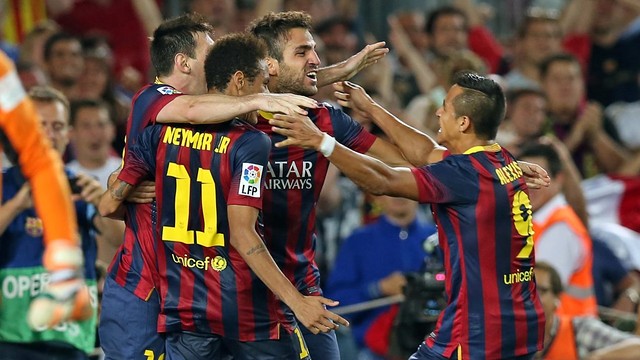 An injury time winner from Alexis streched Barça’s winning run in the league to 12 games and kept them top of the table.

Alves and Messi put Barça ahead, before Seville pulled it back in the last 15 minutes.

Neymar put in his best performance in a Barça shirt so far, constantly taunting the Seville defence and setting up Messi’s goal.

In their first game back after the international break, Barça chalked up their 12th straight league win and their fourth of this season to stay top of the table. It certainly wasn’t all plain sailing though with an injury time winner from Alexis just edging it Barça’s way, as the 76,765 saw their team suffer in the final few minutes.

Gerardo Martino gave Cristian Tello his first start of the season, partnering Messi and Neymar  in attack, whilst  Xavi returned to midfield alongside Iniesta and Sergio, who had recovered from the injury that kept him out of the international games.

Within the first quarter of an hour, Barça found themselves in difficulties when Jordi Alba was forced off with what proved to be a torn muscle and  Adriano had to come on and replace him. Neymar was already looking lively though and had forced two good stops from the Seville keeper, who was again called on to keep out Tello on 20 minutes. Despite these chances and a Messi free kick which flew inches wide, Emery’s side were as expected, well organised in defence and leaving few spaces for the Barça front men.

Eventually though, Dani Alves found a way through, arriving late to meet a great Adriano cross to head home after 35 minutes.

Seville looked more dangerous from the off after the break and began to threaten Valdes’ goal, with the ref ruling out a goal from a corner for a foul on Sergio Busquets. Martino brought on Alexis and Cesc for Tello and Iniesta, as the game loosened up and Enery’s side began to look more confident.

After trying his luck with  a shot from the edge of the box, Messi then doubled the lead after  Cesc won the ball in midfield to release Neymar down the left and the Brazilian set up the world number one for his sixth goal of the season to double Barça’s lead and surely put an end to the visitors resistance. Seville refused to lie down though and after Rakitic scored two minutes later (76), Coke then fired home the equaliser from a corner on 90 minutes, with the ref signalling three minutes of injury time.

There was still time for a fright or two at the back, but Messi struck again just when it looked as if Barça’s winning run might be coming to an end, dribbling to the dead ball line on the right and cutting back the ball, which the keeper could only parry pout to Alexis who fired home a winner that sent the crowd into ecstasy as they celebrated yet another league win.

It’s back to the Camp Nou on Wednesday, when Barça take on Ajax in the Champions League.