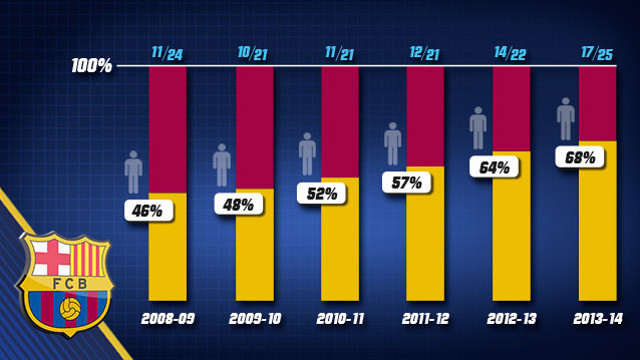 Of the 25 players in the FC Barcelona first team, 17 came from FCB’s own youth academy, the highest percentage of recent years

Sergi Roberto, Oier, Tello and Cuenca are the four latest players to be have come up through the youth system

The 17 local products in the first team

The FC Barcelona policy of producing players from within is still bearing fruit. With each season, there seem to be more and more products of the club’s own youth system making it to the top level at the Camp Nou, and 2013/14 is no exception.

No fewer than 17 of the 25 members of the Barça first team previously played for the club’s lower level teams. That means that 68% of the players working under orders of Gerardo ‘Tata’ Martino are locally groomed, the highest percentage of recent years, and a clear reflection of Pep Guardiola and Tito Vilanova’s preference for producing talent from within.

In 2008/09, Pep Guardiola and his assistant Tito Vilanova took charge of the first team after winning promotion the season before with Barça B. 11 of the 24 players in the first team squad that season (almost 46%) had come from the FCB academy. There was a drop in numbers the year after, but in a smaller squad of 21, the 10 local players actually amounted to a higher percentage of the total 47% as the likes of Valdés, Xavi, Iniesta and Puyol were joined by Jeffren.

In 2012, Tito Vilanova took over from the departing Guardiola, and one of his first moves was to promote Dos Santos, Bartra and Montoya. Those three took the number of former La Masia residents up to 63%. This was the season when, in November 2012, an amazing 11 players from the youth system were fielded at the same time in a game at the Ciutat de València against Levante after the injured Alves, the only imported Barça player on the pitch, was replaced by Montoya.

This summer has seen the figure rise even more. There’s a bigger squad this term, 25 players, and 68% of them played youth football at the club. The 17 is reached thanks to the promotions of Sergi Roberto and Oier, while Cuenca has returned from a loan spell at Ajax.

The longest serving Barça player is Xavi Hernández, who arrived when he was just 10 and is now 33. 15 of those 23 years have been spent in the first team, almost half his life. Curiously, when Xavi first joined Barça, players like Cristian Tello, Isaac Cuenca, Marc Bartra and Martín Montoya were only just being born.

The second most senior Barça player is Carles Puyol. The captain has been here for 18 years and made his first team debut 14 years ago under Louis Van Gaal.

The first team member that has been the shortest time at FC Barcelona is Sergi Roberto, who arrived seven years ago and after four years playing for the B team, has finally won a regular place in the first team squad.