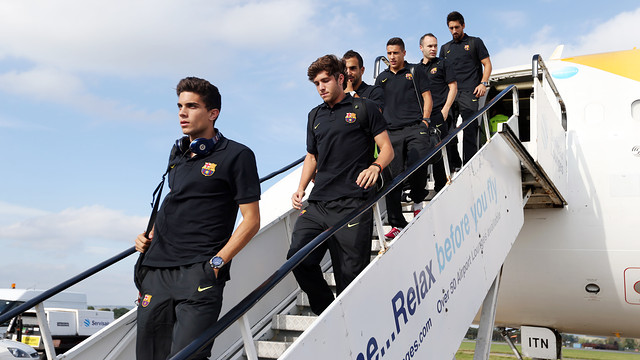 The plane taking the first team squad to Glasgow for Tuesday’s Champions League game arrived in Glasgow at 13.00 this morning

The squad have arrived in Scotland. The plane taking the Barça squad to Glasgow for Tuesday’s Champions League game against Celtic took off at 10.30 this morning and landed in Glasgow two and a half hours later.

Club President Sandro Rosell, board members Jordi Moix, Pilar Guinovart, Ramon Pont, Silvio Elías, Dídac Lee and Josep Ramon Vidal-Abarca and Sporting Director Andoni Zubizarreta accompanied the squad on the flight. Also on the plane were the members of the Club’s Youth A team, who play Celtic’s Youth team in the second game of the UEFA Youth League at 15.00 Catalan time – a game which will be live streamed on fcbarcelona.cat and live on Barca TV.

The squad went straight o the team hotel – Radisson Blu–  where they will rest until this evening, when they are due to train at Celtic Park at 20.00. Tata Martino and Cesc Fàbregas will give a press conference before training at 19.15.