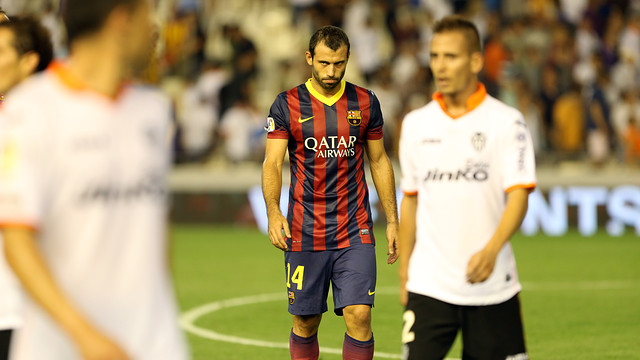 Gerardo ‘Tata’ Martino has made the best ever start from a new Barça boss in the league, with three wins from three games, 11 goals and just two conceded

Valdés, Piqué and Mascherano have played every minutes so far this season.

The win in Valencia saw a Messi hat trick and marked the best ever debut to a league season by a Barça manager. Below are a few more stats that came out of the game:

· Víctor Valdés, Gerard Piqué and Javier Mascherano are the only three Barça players to have played for every minute of every official game the team have played so far this year (450 minutes).

· The goals at Mestalla  mean that Messi has now scored three or more in a league game on 17 occasions, a record shared with Cristiano Ronaldo and only bettered by Zarra (22), Di Stéfano (22) and Mundo (19).

· Gerardo ‘Tata’ Martino has made the best ever start to a league season by a debuting Barça manager, with three wins from three, 11 goals scored and just two conceded.

·  Barça  dominated possession with 62% and had 20 shots on goal – nine of which were on target.

· In all, Barça committed 11 fouls and picked up three yellow cards (for Jordi Alba, Dani Alves and Neymar). Valencia committed 20 and had two players booked (Joao Pereira and Éver Banega).