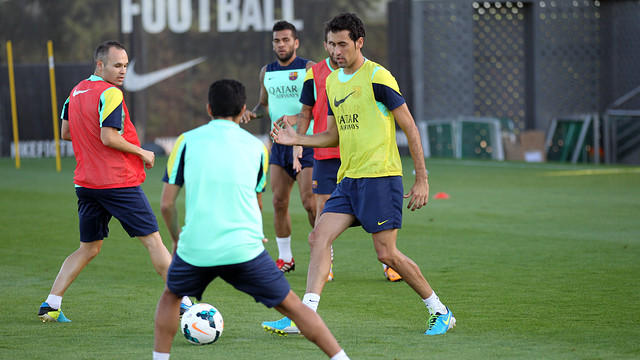 Puyol is left out, but joined the squad for part of the final training session before departing for Madrid

FC Barcelona will be taking a squad of 19 players to Madrid. The coaches have decided to rest Sergio Busquets, while the other players as the same as the ones that faced Ajax. So, Tata Martino, who is flying straight to Madrid from Argentina and will be waiting for the team there, will need to drop one more player from the definitive squad to take on Rayo Vallecano.

The injured Carles Puyol, Jordi Alba, Isaac Cuenca and Ibrahim Afellay all stay behind as well.

Before the squad was announced, the players met one last time to train before heading for Madrid on Saturday morning. Gerard Piqué, despite his minor injury worries, was with them as, as was Carles Puyol. Both players were able to train with the others, but only the former has been included in the list.