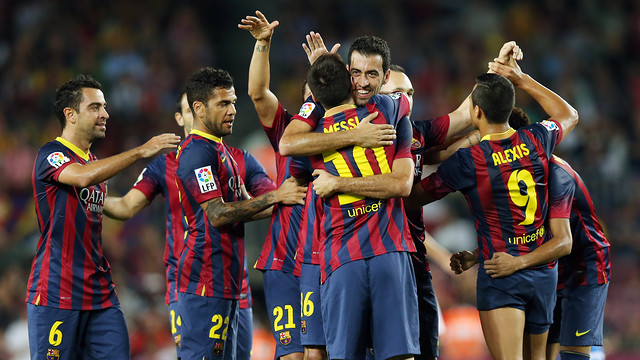 We look at some of the interesting facts surrounding last night’s win over Real Sociedad:

– Following the goals scored by Sergio Busquets and Marc Bartra, no fewer than 11 different players have now scored for FCB in official matches this season.

– Marc Bartra hadn’t scored since May 2011 in Malaga. Last night he got his second goal for Barça.

– Messi got his seventh league goal of the 2013/14 season and stays top of the goalscoring table.

– With 323 official goals, Messi has equalled Raúl and has Zarra in his sights (335 goals).

– Messi has scored in the last 13 league games at the Camp Nou, every one since the win against Zaragoza last term.

– The Argentinian has scored from 14 headers during his career, 13 times for Barça and once for his country.

– Neymar has given an assist in his last five matches, against Valencia, Sevilla, Ajax, Rayo Vallecano and Real Sociedad.

– On Tuesday, Barça completed 93% of their passes, the team’s highest tally of the season.

– Barça ended the game with Real Sociedad with nine products of its youth system on the field.

– Barça have never lost a league match played on Tuesday. So far, they have won 17 and drawn four.