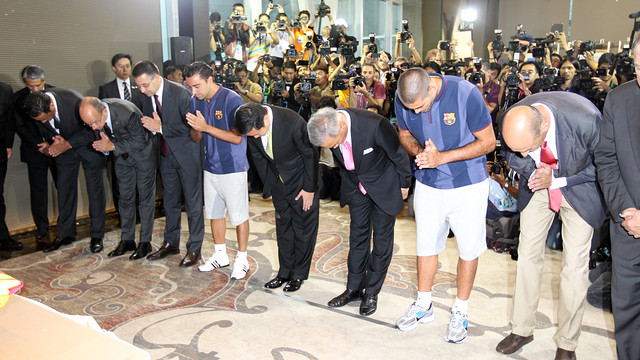 Xavi and Valdés, along with vice presidents Bartomeu and Cardoner and directors Pont, Moix and Vidal-Abarca made a floral offering to an image of the Thai monarchs

The FCB delegation then did the Wai Prah, a gesture that symbolises respect for others and recognition of their importance

Apart from games, commercial events and charity work, protocol is another issue that needs taking care of on tours. Such was the case on Monday in Bangkok, just a few hours after the team arrived. FC Barcelona made the traditional floral offering before an image of the Thai monarchs on an altar, accompanied by the country’s traditional salute, the Wai Prah. This is a common gesture when important delegations visit the country.

The FCB delegation then did the Wai Prah, which involves putting the palms of the hands together at chest height and bowing with a smile. It is a symbol of respect for another person and recognition of their importance. The gesture was then repeated for the 50 or so members of the media as a sign of respect and gratitude to the Thai people.

85-year-old King Bhumibol Adulyadej ‘Rama IX’ is the longest serving head of state in the world and a much respected figure in the country. There are pictures of him or his wife, Mom Rajawongse Sirikit, on multitudes of street-level altars around the city of Bangkok.