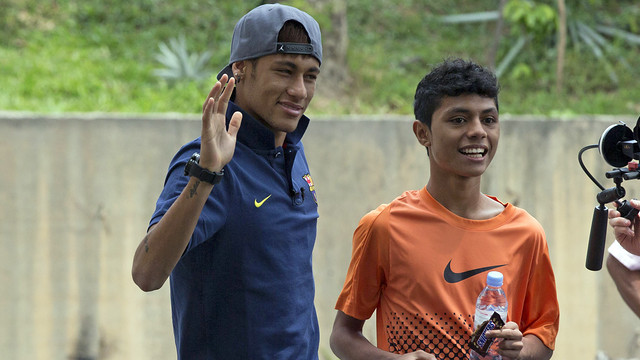 What would your reaction be if Neymar rang the doorbell of your house to go and play football in the school playground with your friends? Well today 15-year-old Syafiq, who lives on the outskirts of Kuala Lumpur, can explain exactly how that feels, after having one of the most exciting times of his life. We accompanied him on this great adventure and now we can tell you exactly what happened, minute by minute:

11.05: Neymar leaves the One World Hotel in a van as part of a documentary he’s making for Nike. He’s accompanied by a translator, a camera operator, a security guard, an assistant and another van with people from Nike and FC Barcelona. A police car and two police motorcyclists go ahead to make a way through the traffic.

11.17: During the ride to Syafiq’s house, Neymar views videos on a tablet to learn all about the lucky young man, who plays for his school team and scored the winning goal in an important match.

11.37: The two vans arrive at the Taman Cahaya district where Syafiq lives.  It’s a suburb on the outskirts of the city. He takes the lift up to the young footballer’s apartment.  Surprise, amazement and a touch of incredulity. Syafiq, who had only ever seen Neymar on the television and on the internet, meets his hero at the door of his home.

11.52: It’s time to lace up the boots and go and play football with the friends who are waiting at school. The two of them go back down to the street, where the passers-by don’t quite know what’s happening and get into the vehicle that is to take them to the field of play. Another van joins them, carrying the youngster’s parents and three younger siblings.

12:11: The journalists and a group of fans are waiting for them at the Victoria Institute, where Syafiq’s friends have been playing for a while on a well-worn futsal pitch with a cement surface. Our stars arrive and the game stops. It’s time to meet the Brazilian ace, who greets the footballers one by one.

12:19: Neymar sits on the side and the game kicks off again. The improvised game carries on as the youngsters do their best to impress their hero with their ball skills.

12:24: Players are substituted and the Barça number 11 joins in the game. They don’t make it easy for him but Neymar entertains the fans with some great touches and a few back heels. The watching crowd around the pitch are delighted.

12:34: The game finishes and they all pose for a group photo. But there’s still one more surprise to come: Neymar gives each of the 20 players at the school a ticket for Barca’s match on Saturday at the Bukit Jalil national stadium.

12.39: Syafiq and Neymar give each other a hug and make their farewells after more than an hour of intense excitement. Before getting back into the van, the Brazilian throws some footballs to the crowd and says goodbye to them all.

12.56: Neymar arrives back at the hotel after devoting the morning off conceded by Tata Martino to taking part in the event organised by Nike. He’s got a bit of time left to relax before lunch with his team-mates at 13.30.