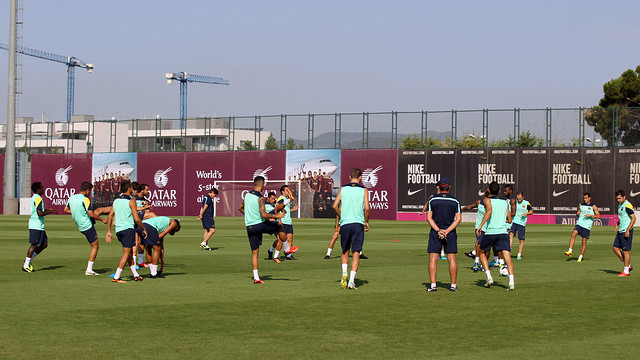 Gerardo Martino will be without Leo Messi for this Sunday’s league match in La Rosaleda (9 pm, Canal +)

On Saturday morning, Gerardo ‘Tata’ Martino named the 19 players for the second league match of the new season.  Leo Messi, who is still recovering from bruising to his left thigh, will not make the trip down to Malaga.  Meanwhile, Sergi Roberto, Montoya and Oier have not made the cut but Adriano, who was suspended for the first leg of the Super Cup, has returned to the match squad.

The players will go to Malaga early on Sunday morning and had their final training session in the Ciutat Esportiva on Saturday morning.  Carles Puyol continued with his recovery programme and Leo Messi had physio treatment.  Youth squad hopefuls Juanma and Ebwelle joined the first team for the session, which was open to the media for the first fifteen minutes.

The match in La Rosaleda kicks off on Sunday at 9 pm (Canal +).