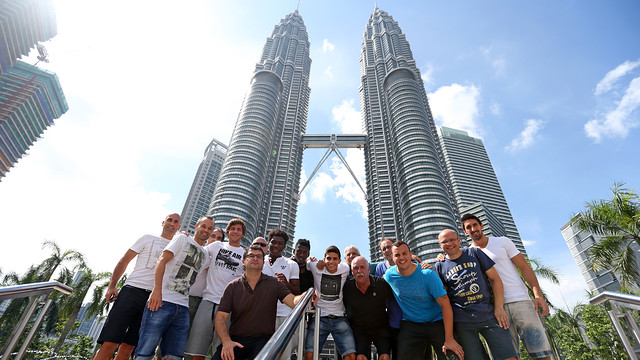 Shopping and sightseeing were the main features of the relaxing first free morning of the entire tour.

For the first time on the tour, the players enjoyed a free morning this Friday in Kuala Lumpur.  Most of the players decided to do a bit of sightseeing and visited the Petronas Towers, a symbol of the modern face of the capital city of Malaysia, in the hours leading up to the afternoon training session.

Tourists for the morning

Xavi, Busquets, Iniesta, Adriano and Valdés were some of the players who visited the spectacular business and office complex.  They were accompanied by some of the younger members of the squad, such as Marc Bartra, Sergi Roberto, Oier Olazábal, Macky Frank Bagnack and Jean Marie Dongou, as well as various members of the coaching staff.

Apart from the usual photos in front of the two 452 metre high towers, they also did some shopping in the Suria shopping centre, which occupies 140,000 square metres on six floors at the foot of the building. Some of the other players visited the Kuala Lumpur China Town, located in Petaling Street, where just about anything can be bought.

Relaxing in the hotel

Other members of the squad, including Fàbregas, Piqué, Mascherano and the injured Pedro, stayed behind in the hotel to relax.  For his part, Neymar took part in a promotional event organised by Nike.  The players were due to meet up again for lunch at 13.30 in the hotel.