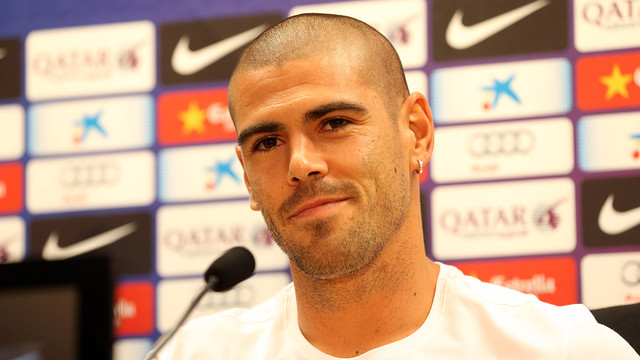 “I’m happy about the way the match turned out. It’s what the manager wanted”

The 7-0 defeat of Levante was a perfect performance.  Víctor Valdés kept his concentration throughout the match and coped well with the few threats that came his way.  However, for most of the match he was a privileged spectator of the pressing game imposed by his team-mates.  Speaking at Monday’s press conference, he told us: “The team looked really strong from the very first minute.  Now we’re defending higher up the pitch and that means that we win back the ball sooner and with more chances of counterattacking and approaching the opponent’s goal, which is much closer than if we recover the ball further back.  I’m happy about the way the match turned out.

Pressure and winning back possession

Tata Martino has focussed on improving a number of aspects, including applying pressure in the opposing half. Valdés pointed to the third goal scored by Dani Alves as an example of how the players carried out the manager’s instructions.  “We did what the manager wanted.  He wanted us to score a goal after winning back the ball and that’s what happened after Messi won back possession”.

Starting the league campaign in such a commanding manner “is what you always want” and the 7-0 score line is “a clear message” for the rest of the teams.  “Let’s hope it carries on like this”.[[CITA_1]]

The goalkeeper also highlighted another change of tactics under Tata Martino: defending against dead ball situation.  Until now, a zonal defence was used but now the manager has introduced man-to-man marking.  “Personally, I prefer the way we’re doing it now.  Everyone has to take responsibility and the goalkeeper has more freedom”.

The team now has to focus on Wednesday’s Super Cup match against Atlético Madrid. “They’re a well-drilled team.  Against Sevilla they showed they’re really tough opponents and they’ll be a test for this Barça side, but I’m confident that everything will turn out well”.

Valdés also insisted that Atlético Madrid will have plenty to say in the race for the league title.  “People always talk more about Barça and Madrid, but you just have to look at the way Betis play, the matches involving Sevilla, Atlético or Valencia… It’s always a competitive league and it’ll be difficult to win at any ground”.