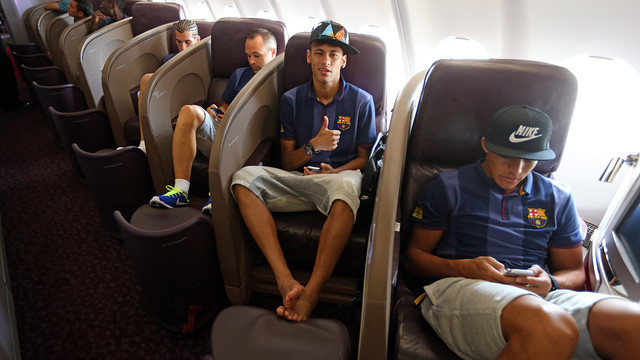 Later on they will be welcomed by the president of the Palestinian National Authority, Mahmoud Abbas, and other local authorities, and will be giving the first of the planned clinics

FC Barcelona are flying to Tel Aviv. This morning, just after 9.00 am, their flight left El Prat Airport for Israel, where they’ll be on the Peace Tour from Saturday to Sunday. The group is being led by president Sandro Rosell, vice presidents Josep Maria Bartomeu, Javier Faus and Jordi Cardoner and directors Jordi Moix, Ramon Ponet, Dídac Lee and Josep Ramon Vidal-Abarca, as well as director of football Andoni Zubizarreta. The 24 players are also being joined by former presidential candidate Lluís Bassat and four fans on a plane whose capacity is 132 people.

The flight will land at Ben Gurion Airport, Tel Aviv at around 14.30 (local time). The expedition should arrive at Hotel Inbal Jerusalem around 16.15. Note that Israel is one hour ahead of CET.

After travelling into Palestine, the players will be visiting the Basilica of the Nativity in Bethlehem. At about 18.00, they’ll be arriving at the Muqata, the headquarters of the Palestinian National Authority, for an official reception with its president Mahmoud Abbas, and the local authorities.

On a busy day, the players will then be going to the Municipal Stadium, Dura, near Hebron, which has the capacity for 24,500 spectators, and is the venue for the first clinic, consisting of workshops and various mini-games with Palestinian children who will be getting the chance to interact with the Barça stars.