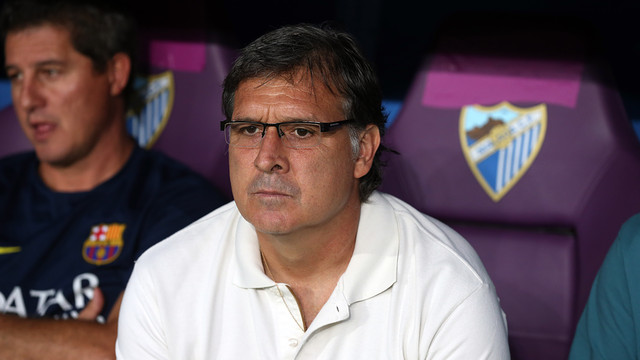 After Adriano’s goal, the Argentine declared: “I place a lot of value on having different goal scorers on the team”

Barça secured three more points this evening thanks to the 0-1 victory over Málaga at La Rosaleda. The Blaugrana dominated the match until the final 20 minutes of the second half when the home team came close to equalising. “We started off strong but our performance dropped as the game went on, we played a good first half in which we lacked effectiveness but we created a lot of chances,” explained Tata Martino in the post-match press conference. The Argentine added: “We controlled the game up until the 25th minute of the second half, but from that point on we lost possession.”

Martino then went on to commend his players for the perfect start they’ve had to La Liga: “In terms of results the start of the competition has been positive, and our level of play has been very good at times in the games we’ve played.” With that said, however, the manager pointed out some areas where his men could improve: “We have to learn how to close out games when we start to lose control.”

One of the standout players in the second half was Neymar Jr. The Brazilian was subbed in halfway through the second half and his performance was notable. “Neymar’s performances against Atlético and Málaga were a bit better than his performance against Levante, he’s improving each day,” said Martino when asked about Barça’s newest signing. Near the end of the match, Neymar sustained a tackle from one of the opposing players. The Argentine manager praised the Brazilian player for not allowing himself to be provoked: “We have someone on the team (in reference to Messi) who is an example of how not to succumb to provocation, and Neymar followed that example.”

Adriano Correia scored the only goal in this evening’s match, his first this season. When asked about the Brazilian right back’s goal, Martino said, “I place a lot of value on having different goal scorers on the team. The right and left backs have both scored and so have the majority of the forwards.”

When asked about Barça’s rival this evening, the manager said, “when we saw their line-up we thought we might be going up a defensive system similar to Atlético’s. Their midfield was very consistent.”