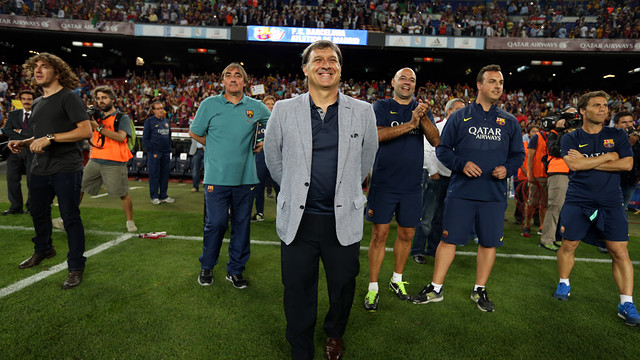 Tata Martino admits that “for me, being a new manager, winning wasn’t the same as losing and that’s why I followed the match intensely”

Zubizarreta: “This title belongs to Tito”

The director of football, Andoni Zubizarreta, talked about Barça’s Super Cup victory over Atletico Madrid. The director remembered Tito Vilanova, the manager who led Barça to the league title last season and thus gave the team the opportunity to feature in this year’s Super Cup. “This title is his,” said Zubizarreta. “It was an intense final. The two matches were very close. We played at a high level but our opponents did as well.’ Zubizarreta highlighted the performance put in by Valdés, who came up with two massive saves: “He was extraordinary. He’s one of the best goalkeepers in the world.” He also talked about Neymar and Messi, both of whom featured in a Barça starting line-up together for the first time. “They played well. Neymar is slowly getting into the team’s style of play. I think we’re really going to enjoy this pair of players.”

Gerardo “Tata” Martino won his first title as FC Barcelona’s manager this evening, but just as he said in the pre-match press conference yesterday, he reiterated that this title belongs to the players and manager who won the Liga last season. “It’s a final that we featured in because of the good work from last season. I’m here because of a tragedy and therefore we’re champions because of the players, Tito and the coaching staff.”

The Argentine manager then went on to admit that the expectations of winning the title were an added pressure to an already difficult job: “It’s a weight off my back to win this Super Cup. For me, being a new manager, winning wasn’t the same as losing.” He added: “I experienced this competition with a lot of intensity … everything in football that is good or bad is because of the players and I don’t like to be in the limelight, especially in this Super Cup.”

“We intend to do much more and we want to insist on working for these types of games,” said the manager. Martino is convinced that his players need to improve but he believes that “we’re not doing too badly considering that the season just started.” He added: “We have to have more pace, more precision and attack into space. The goal is to play more like we did in the first 20 minutes, when we were at our quickest.”

Martino also noted that “one of my intentions is regain our pressure but perhaps we can’t do that against teams that close themselves off at the back. We’re looking for the Barça that can regain its ability to play differently depending on what our rivals throw at us.”

Messi and Neymar featured for the first time together in the starting line-up this Wednesday night and Tata Martino was pleased with their performance: “They played a good game, even though it’s true that they didn’t link-up much. I’m certain, however, that they will find each other on the pitch.”