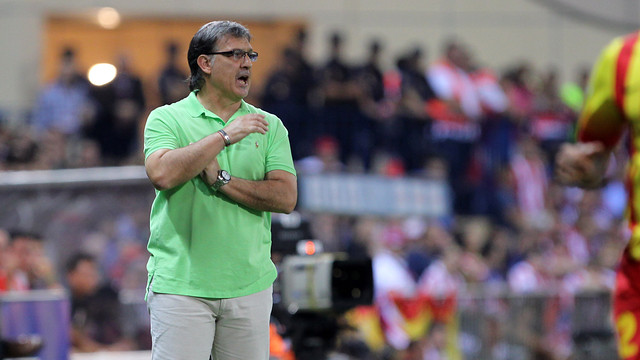 The Barça manager admitted that Atlético were the superior side during parts of the match: “They looked to score on the counter, and they succeeded”

The away leg of the Spanish Super Cup ended in a 1-1 draw, and the result means that the title is very much up for grabs. Tata Martino evaluated the one-all draw after the match: “it’s a result that does justice to what happened on the pitch … The match had very distinct parts, they dominated the first half and we dominated the second.”

“They waited to score through counterattacks, that’s how they scored, and we hoped to score through build-up plays, and we also were successful,” said the manager. When asked about Atlético’s superiority in the first half, the Argentinian noted that “it was difficult for us to find space within their defensive lines.”

“At times you can create one on one situations with long passes,” said Martino. “We were better in the second half, which assumes our fitness level was decisive.”

Insisting on a particular style of play

Looking ahead to the second leg, Martino is convinced that Barça will employ the same style of play. “Barça don’t know how to play differently, we will insist with this style,” declared the manager.

Martino also talked about Leo Messi’s substitution during halftime. Barça’s No10 was subbed off for Cesc due to pain he felt in his left thigh. The manager explained that “it makes no sense to keep a player on the pitch who can’t move comfortably due to discomfort.”