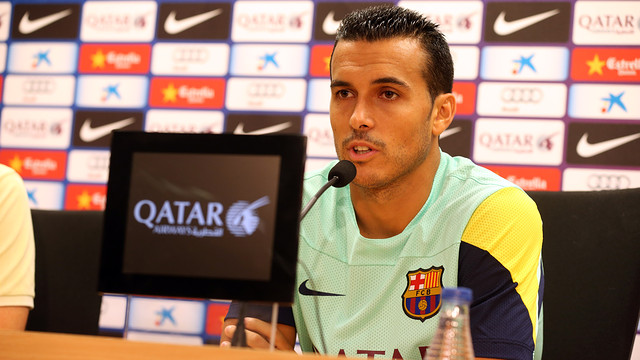 “We’re looking forward to starting the league and all the other games, they’re going to be difficult.”

Pedro Rodríguez spoke to the press on Friday evening, and mentioned that Neymar’s arrival “will bring a lot of joy to the team.” The FCB striker also spoke about the competition he always faces to win a place in the starting line-up. “I’m calm about it” said the Canary Islander. “Every year I’ll face competition in attack, and Neymar’s arrival is a pleasure. He’s one of the best players in the world. I’ve had to face competition every season and it’s hard to get a game. We’re all working hard to get into the starting eleven.”

The Liga kicks off this weekend, and Barça will entertain Levante at the Camp Nou. “We’re looking forward to starting the league and all the other games. They’re going to be difficult” he commented. “The team is in good form for the matches we have coming up. We want to win the Spanish Supercup, that would make us very happy … We have replacements in every position, we have a fine squad. We hope to take things game by game and enjoy plenty of success.”

Asked about Neymar, who will be one of his main rivals for a place in the Barcelona attack, Pedro said that the Brazilian “will help us to unsettle defences and get goals. Those are his best weapons – he can score lots of goals. He’s very dangerous and I am sure he and Messi will understand each other – I can tell that from training. He’ll bring us a lot of joy.”

But Pedro added that Neymar is not the only player with whom he is in direct competition. “We are all competing for places in attack” he insisted. “Neymar, Iniesta, Fàbregas, Alexis, Tello… We are all working as hard as each other to win a place, and then it’s the coach who decides.”

Finally, Pedro commented on how well Real Madrid have reinforced their side, and that they are sure to be Barça’s biggest rival once again this season. “Madrid have a great team” he said. “They have signed young players, who have big futures. We respect them, and they deserve to be respected.”