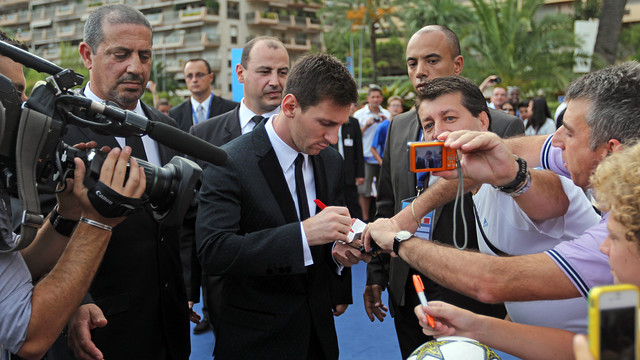 Leo Messi was one of FC Barcelona’s representatives at this afternoon’s UEFA Champions League Group Stage draw in Monaco. The Argentine was also a finalist for the UEFA Best Player in Europe Award, which was won by Bayern München’s Franck Ribéry. The French player received 36 votes from the jury (sports journalists), ahead of Messi’s 13 and Cristiano Ronaldo’s 3.

Messi was asked by Pedro Pinto about Group H of the Champions League, where Barça are paired up with AC Milan, Ajax and FC Celtic. “We have a lot of even groups. We’re going to have some really good games. We’ve already faced Milan and Celtic, and it will be the first time against Ajax. I think it will be a difficult group, like always.”

The Argentine added: “Barça are obligated to win because of what this Club means. We’re preparing ourselves even though it gets more difficult each year because our opponents get stronger.”