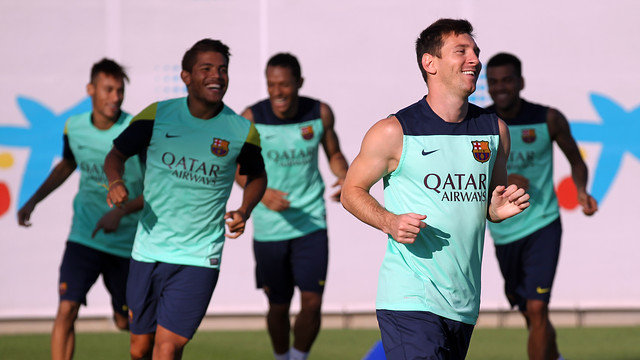 The Argentinian completed the full session, as did Alves and Valdés, who had trained separately on Thursday

Just two days before Barça get their Liga campaign under way with a game at the Camp Nou against Levante (Sunday at 19.00), Tata Martino has continued preparing his team for five official games in the space of a fortnight. Friday’s session was held behind closed doors at the Ciutat Esportiva. Leo Messi seems to be recovering well from his quadriceps injury, and was able to train normally with the rest of the squad, as were Valdés and Alves, who had worked out in isolation the day before. The full back has been receiving treatment on a bruised ankle, while Valdés has been doing special recovery work after the Spain friendly in Ecuador.