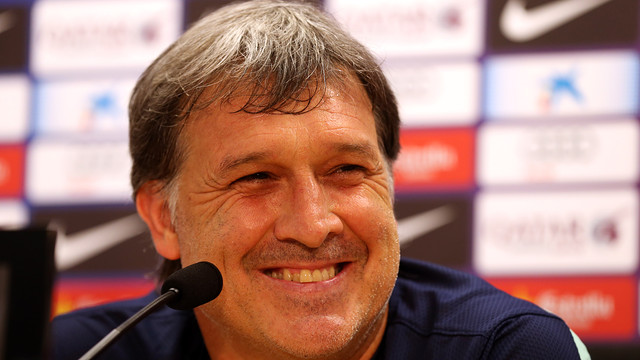 Tata Martino will lead his men for the first time in a final when Barça take on Atlético Madrid tomorrow night in the Spanish Super Cup. “The aspirations and obligations of managing Barça always mean you have to win, we will try to do a good job in order to win the title,” explained the manager.

“It’s difficult for Barça to not be favourites. But even if we accept that role, it doesn’t mean that the title is guaranteed. In a long competition like the league, which has 38 matches, there are more possibilities of winning than in a final that lasts 180 minutes, where everything is more equal. It only takes a good or bad night to win or lose the title,” explained Martino. [[CITA_1]]

The manager also warned of the danger Atlético Madrid, the reigning Copa del Rey champions, bring to the pitch: “Atlético Madrid are an extremely tough test for us because of how they play, how they take on their opponents, how solid they are and especially because of how they win.” He added: “They are a very intense side, they’re comfortable without the ball. When they have it, they are vertical and they have good attacking players.”

When asked about kick off time (23.00), he explained: “I don’t think it’s a normal time to play a football match, but I don’t like to make any justifications for a bad performance. Barça must play well and win despite the scheduled kick off time.”

Martino was then asked about the possibility of Neymar Jr being named to the starting line-up. “We’ll have to wait until the game to see,” said the manager. He did reveal, however, that his goal is to give playing time to all his players throughout the entirety of the season. [[CITA_2]]

As time goes on it’s becoming increasingly clear how Tata Martino intends to manage FC Barcelona. This Tuesday he revealed a few more details on why he decided to sub Messi during the match against Levante: “It’s about both sides understanding each other. Messi understands what this is about. It’s clear that we talked about it and it’s clear that I also have to be sufficiently careful to not sub him off five times in a row. It’s a relationship that requires balance.”

He continued: “This is how I intend to deal with Messi and the players. The decisions are made by me, but I rarely make drastic decisions without talking to the players first. I feel more comfortable if there’s dialogue between us. There’s nothing wrong if I have to reconsider my opinion if a player convinces me.”

The manager then went on to talk about his training regiment: “I have to get used to how things are done in Spain, not just in Barcelona. If I were to take my last year at Newell’s as a guide, I’d train 35 days in a row. We’re currently in the ‘get to know each other’ stage, but we also have to win.”

Atlético Madrid are a very intense side, they’re comfortable without the ball
The decisions are made by me, but I rarely make drastic decisions without talking to the players first