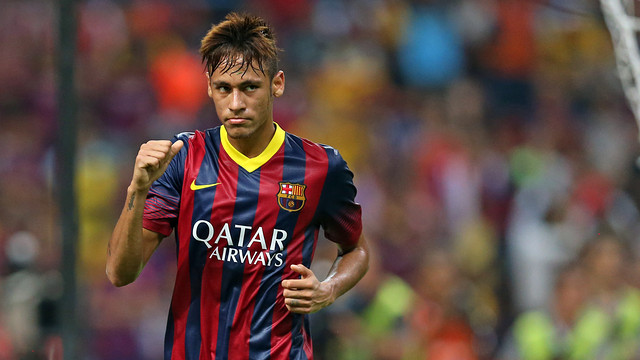 Cesc, Neymar and Piqué got the goals for Barça and Cesc limped off the pitch with an ankle injury

The tour of Malaysia has come to an end.  Barça will now say farewell to Asia after a 1-3 win against a Malaysia XI that put up stiff resistance.  With Messi ruled out at the last moment with a thigh strain, Barça was always the better side in Kuala Lumpur’s Shah Alam Stadium but had to work hard to break through an efficient defensive performance.  Goals from Cesc (injured in the final minutes), Neymar (a gem!) and Piqué (with all the finesse of a striker) made the difference.

Barça found themselves up against a well-organised and aggressive defensive performance, with the entire rival team camped out in their own half.  No doubt this will be a familiar story for Barça throughout the coming season and Tata Martino’s men tried every attacking trick in the book to find a way through.

The difference in technical quality between the two sides was predictably wide but was compensated by the enthusiasm of the Malaysian players and the local crowd.  The Malaysia XI had a great chance to take the lead in the 20th minute through Idlan Talaha but his delicate chip hit the post.  There wouldn’t be much more joy for the home side.  Barça continued to press forward with long range efforts from Neymar (min. 26) and Iniesta (28).

A gem from Neymar

One of Barça’s better attacking options during the pre-season has been Jordi Alba’s rampaging runs down the left wing.  In the 33rd minute the fullback centred for Cesc to head without much power, but the unfortunate local keeper could only push the ball into the corner of his net.  Barça continued to dominate and the Malaysia XI waited for their chance on the break.  They were rewarded with an equaliser in the 41st minute when Amri smashed a clearance from Alba past Valdés.

Local joy was short-lived as just two minutes later Neymar put Barça back in front with a superb effort.   Fabregas provided an inch-perfect pass for the Brazilian to ease past his marker before coolly hitting a left-footed shot past Fahmi. Brilliant!

Martino made three changes at halftime including Neymar and the tone of the game altered slightly as Barça stepped up their control and pushed ever closer to the opposing goal area.  The Malaysia XI resisted as best they could with a six-man defence and had fewer and fewer chances in attack.  A string of substitutions broke the flow of the game as Barça went into the final stages of the match with a very different line-up.

Cesc was the provider yet again for Barça’s third but this time it was Piqué who showed all the flair of a striker to fire past Fahmi (min 75).  Dos Santos might have made it four but there were no more goals.  Cesc went off in the final minutes with an ankle injury and Barça rounded off their time in Kuala Lumpur with a 1-3 win.