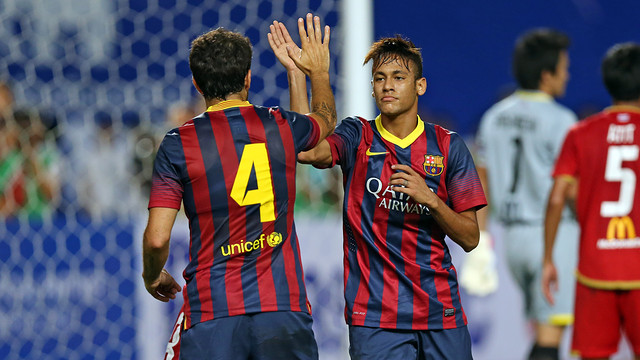 This afternoon’s match will be the last before the Blaugrana kick off their title defence of La Liga, next Sunday against Levante

Barça will close out the 2013 Asia Tour and the preseason this Saturday afternoon (Catalan time) in Kuala Lumpur. A selection of the best players in the Malaysian league will be Barça’s sixth and final rival before the official start of the season next weekend.

The FC Barcelona expedition will return to Catalonia after the match, putting and end to the six-day tour of Thailand and Malaysia (which also included  pit stops in Israel and Palestine). But the frenetic pace won’t end for some of the Barça players, Tata Martino will have to make due without his internationals next week ahead of the team’s debut in La Liga, which is scheduled for next Sunday.

Before the flight back to Europe, Barça will play its first match in Malaysia. The game was initially supposed to be played at Bukit Jalil National Stadium, but due to the poor state of the pitch, match organisers and FC Barcelona executives agreed to move the match to Shah Alam Stadium.

Martino’s men come into the match after defeating Thailand in Bangkok by 1-7. Tello, Dos Santos, Pedro and Pinto, all of whom are recovering from slight injuries, are doubtful for the match.