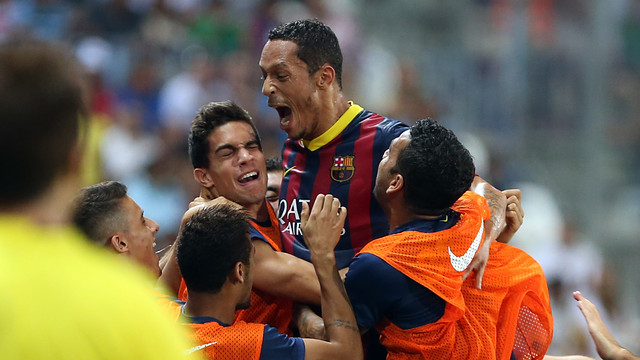 Three days ahead of the Spanish Super Cup decider at the Camp Nou, Barça showed character and resilience to make it two wins from two in the league so far, seeing off Malaga at La Rosaleda thanks to a superb Adriano goal just before half time.

Only Valdés, Piqué, Mascherano, Xavi, Alexis and Pedro have started all three games so far this season and Martino rang the changes in his team selection, sending out Cesc as a false number nine with Song as his holding midfielder and Adriano as right back and Jordi Alba on the left. Bernd Schuster opted for a defensive looking 4-5-1 formation, as his side attempted to reduce the spaces Barça could exploit with their passing game.

Adriano cracker from outside the box

The game took a similar course to last Wednesday’s match at the Vicente Calderon, with Barça pressing well and dominating possession, as they patiently probed the home defences, whilst Malaga looked to exploit the counter and any dead ball situations that came their way. Cesc, Piqué and Alexis all had headed efforts, whilst Pedro nearly rounded the keeper Caballero and Iniesta tried his luck with a long range shot, but the opening goal the team’s control deserved didn’t come until the dying moments of the first half, when Adriano cut inside from the right and fired a beautiful swerving left foot drive from outside the box into the far corner for a stunning strike.

That was virtually the Brazilian’s last contribution as he was replaced by Alves after the break with a thigh injury. Despite going behind, Malaga refused to take a more positive approach and Barça were unlucky not to double their lead when Piqué hit the woodwork with a header and Caballero did well to stop a Xavi free kick.

Neymar came on just past the hour mark for Pedro and after a fine individual run, the Brazilian tested Caballero with a well struck free kick. Fabrice then put Barça’s nerves on edge with a shot against the post and the home fans tried to lift their team to one final effort. Sergi Roberto came on to give a bit more strength to Barça’s defensive efforts, but it needed a great double save from Víctor Valdés just before the final whistle to ensure the three points and make it two league wins from two so far ahead of Wednesday night’s Spanish Super Cup second leg against Atletico Madrid at the Camp Nou.