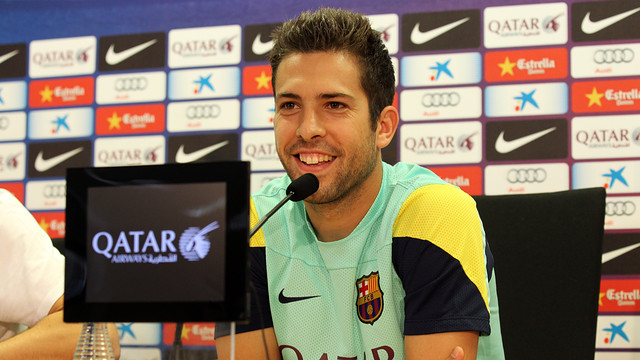 The fullback knows all about playing at Mestalla and insists that Valencia “will be going all out for this game, especially after what happened to them last week at Espanyol”

On the Champions League draw, he said that “it’s an advantage to play teams we know so well … But it won’t be an easy group”

Jordi Alba is looking forward to travelling with Barça to Mestalla, where he spent three seasons before moving to Catalonia last summer. So he knows how Valencia always raise their game when they face FC Barcelona, saying that “I’m sure they’ll be well up for the game against us. I was there for three years and Barça’s visits are always a special day for the fans, the players and the coaches – they treat the game like a final”. Djukic’s side have come in for some heavy criticism after a poor display at Cornellà-El Prat last week, but Alba reckons ““the season has only just started, so it’s wrong to criticise a team so early … They will be going all out for this game, especially after what happened to them last week at Espanyol”.

The player also commented on how FC Barcelona have been grouped with Milan, Ajax and Glasgow Celtic in the Champions League. “We know it’s not an easy group because last season we lost to both Milan and Celtic” he said. “Ajax are a very good team who like play when they have they have the ball and who are aggressive when they don’t … It is advantage that they’re all teams we know in depth. But we’ll stick to playing our game and try not to make the mistakes we made last season. We need to make sure we finish top of the group.”

Alba accepted the old cliché that there are no easy games in Europe, but nevertheless insists that “Barça are expected to qualify. We will try to win every game and make it into the last sixteen … Our objective this season is to win every trophy and it’s been a few years since we won the Champions League so we’re especially hungry for that, but we want to win all the competitions that we’re in.”

So far this season, Barça have only conceded one goal in four official matches. Alba explained this good record by saying that “we’re all putting on defensive pressure, even Leo, and that’s why we’re defending better. If we create pressure from the front, the ball is always going to be further away from our goal.”