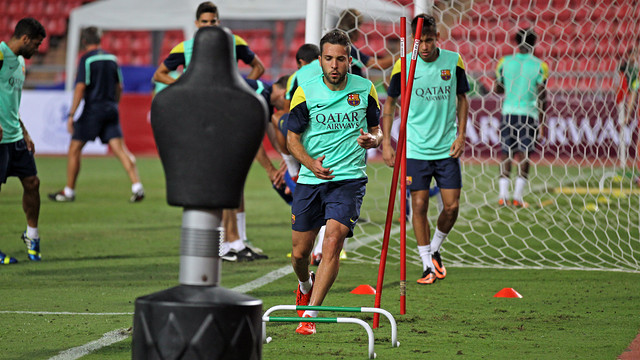 Not much has changed under the new manager, but the full back is positive about what is being done

Jordi Alba spoke to the media after the second training session in Bangkok. This is his first tour with Barça, and he has noticed the training here is just as intensive as it would have been in Barcelona. “We are working hard” he said. “True, those of us who were at the Confederations Cup have only played half a game, but I think we’re OK. We’re working hard despite the heat and humidity.”

He also spoke about life under Gerardo ‘Tata’ Martino. “He’s a great manager who’s doing a lot of positive things. I think it’s more or less the same. Perhaps he asks us to do some things different but it’s all very similar to what we were doing before”.

Jordi Alba is also convinced that Neymar will do a lot for the team. “He’ll adapt quickly to the Barça way” he said. “He seems very keen.”

And he also remembered Messi, saying that “he’s the number one and will be as long as he wants to be.”