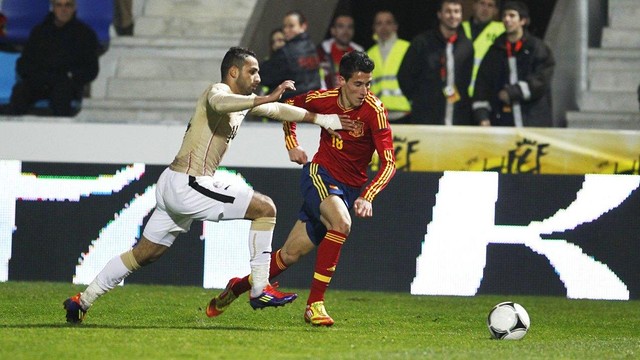 Cristian Tello could make his full international debut tonight against Ecuador, while Víctor Valdés, Jordi Alba and Andrés Iniesta are also in the squad

Messi, Mascherano, Neymar, Dani Alves and Alexis will all be playing friendlies in Europe

It is not just the first team players that have internationals. Youth and Barça B players Tonny Sanabria and David Babunski, respectively, could also be playing for their full international squads Paraguay and Macedonia, respectively. The former has a fixture against Germany (20.45) and the latter against Bulgaria (20.45). Also, Dongou will be joining Song for a training camp with the Cameroon national side.

Nine Barça players have friendly matches on Wednesday night, just four days before the league kicks off against Levante (Sunday August 18 at 19.00), all of which are matches between teams from different continents. But the only players that will be travelling outside of Europe are the Spanish internationals, while Alex Song is meeting up with the rest of the Cameroon squad for a training camp, but no match.

The Olympic Stadium in Rome is the venue for a game between Italy and Argentina, with the latter featuring Messi and Mascherano. Alejandro Sabella is using the game in preparation for the World Cup qualifiers, with Argentina currently top of the Conmebol group table. Italy, meanwhile, are unbeaten in qualifying and also lead their group.

Neymar and Dani Alves will be at the St. Jakob Park in Basel to play Switzerland for Confederations Cup winners Brazil, who are already through to the 2014 World Cup as hosts. Luis Felipe Scolari has also named former FCB player Maxwell in this game against a Swiss team that is leading its qualifying group and has only conceded one goal in six games.

Alexis will be playing for his country against Iraq in the Danish capital. Chile are fourth in the South American qualifying competition, while the theoretically inferior Iraq finished bottom of their group in the Asian qualifying zone with just one win, against Jordan.

Barça’s Víctor Valdés, Jordi Alba, Andrés Iniesta and Cristian Tello have all been named by Vicente del Bosque in the side that’s playing in the Ecuadorian city of Guayaquil at the Estadio Monumental, home of the Barcelona Sporting Club. One of the biggest stories of the night could be Cristian Tello’s full international debut, while Cesc Fàbregas is a late absentee through injury.