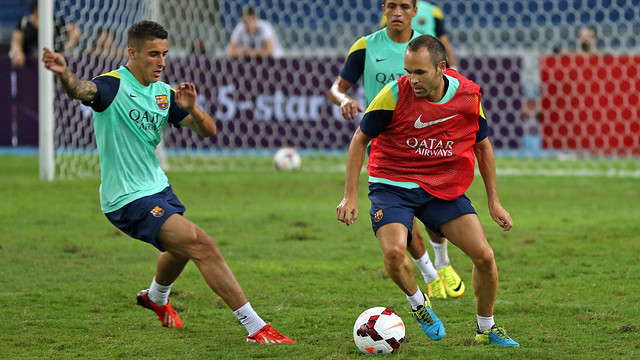 Victor Valdés, Jordi Alba, Andrés Iniesta and Cristian Tello will join up with Spain for a friendly against Ecuador on 14th august

Alexis Sánchez is part of the Chile side that will play Iraq in Denmark, Messi and Mascherano go to Italy with Argentina while Alves and Neymar will travel to Switzerland with Brazil

With the start of the league campaign just around the corner, nine Barca players have international commitments before the opening game of the season against Levante. Many eyes will be on Cristian Tello, who has been called up for the first time to the senior Spain squad for a friendly against Ecuador.

Tello will be joined by team-mates Valdés, Jordi Alba and Iniesta, but Cesc Fàbregas has a sprained right ankle.  The match is being played in Guayaquil on 14th August.

In addition to the Spanish internationals, various South American sides will also feature Barça players. Alexis Sánchez is part of the Chile squad to face Iraq in Brondby (Denmark).

Leo Messi and Javier Mascherano have a match with Argentina against Italy in Rome while Alves and Neymar join up with Brazil to play Switzerland.

This means that Gerardo Martino will be without almost half of his players in the week leading up to the first competitive game of the season.