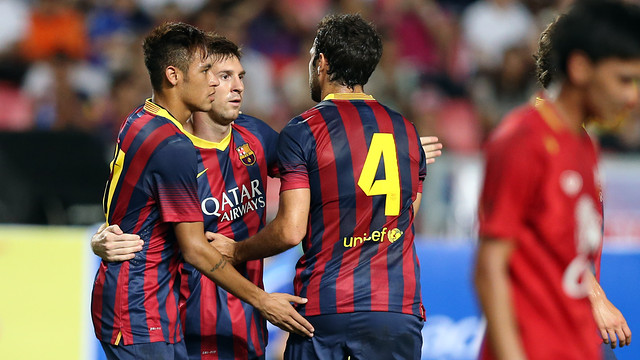 The league is back.  Barça kick off the new campaign against Levante in the Camp Nou in defence of the title they won so commandingly last season.  A busy pre-season dominated by the resignation of Tito Vilanova comes to an end.  The reigning champions start a new era with Gerardo ‘Tata’ Martino on the manager’s bench and Neymar de Silva as the outstanding new signing.

The manager has broken with recent practice and has announced his squad – including Neymar -the day before the match, a routine he intends to continue.    Pedro, Messi and Cesc have all been cleared to play by Club doctors but Oier, Montoya, Sergi Roberto and Dos Santos have been dropped from the squad while Puyol, Afellay and Cuenca are ruled out through injury.

It’s the start of a frantic fortnight for the team which will feature three demanding league games and the first trophy of the season – the Super Cup against Atlètic Madrid.

First up is Levante, a club that has never won in the Camp Nou.  The club’s new manager Joaquín Caparrós also has a poor record against Barça with just one win and six draws in 23 matches.

Levante has carried a profound shake-up of the squad over the summer losing players such as Munúa, Ballesteros, Barkero and Iborra, recently signed by Sevilla.  Meanwhile, Ivanschitz, Xumetra and Barral (who remains a doubt for Sunday’s match) have been brought in boost Levante’s fight for top flight survival.