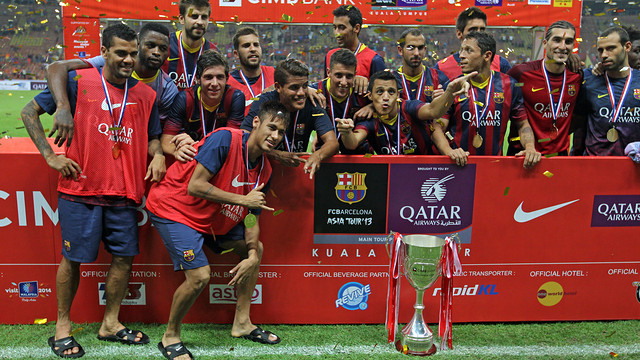 FC Barcelona’s 2013 Asia Tour came to an end after this afternoon’s match against Malaysia XI, the Blaugrana will now focus on preparing for the start of La Liga

– FC Barcelona wrap of the 2013 Asia Tour after spending three days in Kuala Lumpur. The question is: What happens next year? The answer is a bit complicated seeing that there’s a World Cup next summer and that most of the first team will still be on holidays.

– The final of the World Cup is scheduled for July 12 and many Barça players have a pretty good chance of featuring in the championship match. If we add four weeks of vacation starting from July 12, predicting Barça’s next preseason becomes difficult.

– Regardless, the Club is satisfied with the opportunities in the Asian market, and it’s a pretty good bet that the Blaugrana will remain invested.

– Not counting the Joan Gamper Trophy, the 2013/14 preseason brought in approximately 10 million euros into FC Barcelona’s coffers, according to economic vice-president Javier Faus. Of the 10 million, 6 million was earned from the matches played in Bangkok and Kuala Lumpur.

– FC Barcelona will now focus on its first official match of the season, which is scheduled for next Sunday against Levante.

– There have been various meet-and-greets organised by the sponsors of the 2013/14 Asia Tour. The most recent one was organised by H&S this afternoon, it was attended by Piqué and Pedro.

– The two highest goal scorers of the team this preseason are Messi (5 goals) and Pedro (4 goals), coincidentally these are the only two players to miss the last preseason match of the 2013/14 Asia Tour.