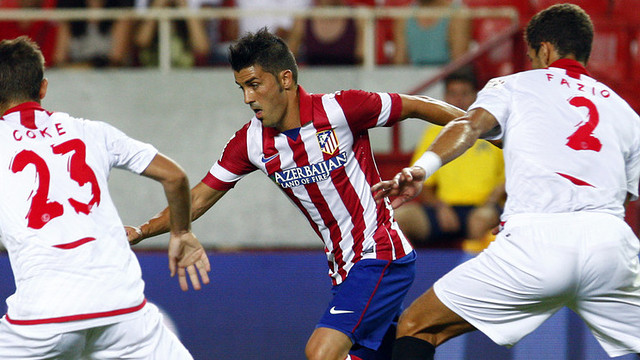 He has won five, drawn five and lost four games against FC Barcelona

David Villa has a good record against Barça. Before playing for the club, he had faced the Catalans 14 times, scoring seven goals (two of which were penalties). That is the equivalent of one goal every two games.

On Wednesday, Villa will be welcoming his former colleagues to the Vicente Calderón for the Spanish Supercup match, where he’ll be defending the colours of his new club, Atlético Madrid. It will be the first time he has faced his old side since joining the mattress-makers in the summer.

Before FCB, Villa was at Real Zaragoza and Valencia and faced his future employers at Barça fourteen times between 2003/04 and 2009/10. He only lost four of those matches.

None of those games was in the Spanish Supercup. They all corresponded either to the league or cup.

First goal against FCB for Zaragoza

The Asturian was at Real Zaragoza from 2003/04 to 2004/2005, during which time he played Barça five times, winning two, drawing once and losing once in the 03/04 season and once the season after.

He was just 21 years old when he scored the winner for the Aragonese outfit against Barça in the cup first leg match in 2003. It was his first ever goal against Barça, and the season after he’d repeat the trick, but this time it was a mere consolation goal in a 4-1 defeat.

It was in 2005/06 that he really started making a name for himself as a goalscorer, with three goals against the side then managed by Frank Rijkaard, two in the first Liga meeting at the Camp Nou 2-2, and the only goal of a 1-0 win for Valencia later in the competition.

David Villa scored another league goal against Barcelona in 06/07 as well as one in the Copa del Rey of 07/08, both of which were equalisers in games that ended 1-1.

David Villa spoke to the media on Monday about this re-encounter with his former team mates. “I have good memories and many good friends at Barça, but tomorrow they’ll be opponents” he said. “But I’m no stranger to these things, I have often faced former colleagues and friends.”