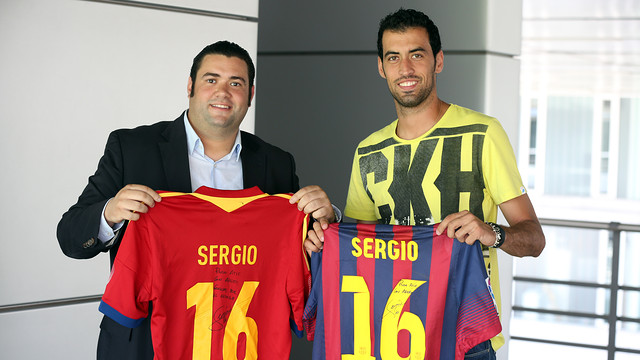 The midfielder warns that Atlético “are an intense team; they’re excellent on counterattacks”

The Spanish Super Cup is due to start in just a couple of hours, and for Sergio Busquets the match against Atlético Madrid is going to be special because he’ll play against his former team-mate, David Villa: “He spent many years here and now, suddenly, he’s going to be on the pitch with different uniform on, it’s going to be strange.” In any event, the midfielder believes that “these are things that happen in football” and he’ll deal with it “in the most natural way possible.”

Busquets expect a “very intense” Atlético Madrid this evening: “We know how they play. They close themselves off well at the back and they’re quick to launch counterattacks. This is the beginning of the season and we don’t know if they are on top form yet, but last year they put in a great season and they won the Cup.”

Before making these statements, Busquets signed and gave away two football kits – one was a Barça uniform and the other the Spain strip – for a Saudi Arabian footballer, Abdullah Otayf, who dedicated a goal to the midfielder in December. The Al Jazeera journalist who interviewed Busquets will deliver the kits to Otayf at a later date.