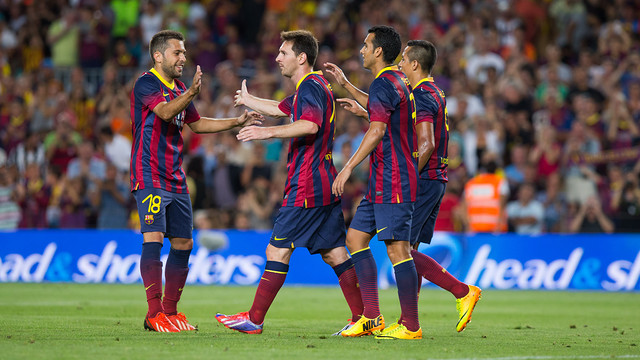 Judging by their preseason form, Barça and Gerardo Martino are more than ready for the start of official competition, but the first two weeks present a tough schedule ahead of the first break for internationals. After entertaining Levante, FCB face tricky journeys to Malaga and Valencia and also play Atlético Madrid for the first official trophy of the season, the Spanish Supercup.

The Camp Nou will be the venue next Sunday at 19.00 for the first game of the league season, at home to a Levante side that will be looking to reproduce its good form last term. The Wednesday after, Barça are off to Madrid to face Atlético in the first leg of the domestic Supercup. The game against the Copa del Rey holders kicks off at 23.00.

Just four days later, Barça have their first away game of their league title defence. That’s on Sunday against Malaga at La Rosaleda, starting at 21.00. The Sunday after, September 1, and at the same time, Barça are on the road once again, this time at Mestalla, home of Valencia.

But between those two away fixtures, Barça will be hoping to lift their first silverware of the season. That’s in the second leg of the Spanish Supercup, against Atlético on Tuesday August 28 at 23.00.

After that hectic schedule of five games in two weeks, domestic football takes a break for a crucial round of World Cup 2014 qualifiers, which involves crunch fixtures for several of the Barcelona players. Barça return to action on the weekend of September 15 for the visit of Sevilla.