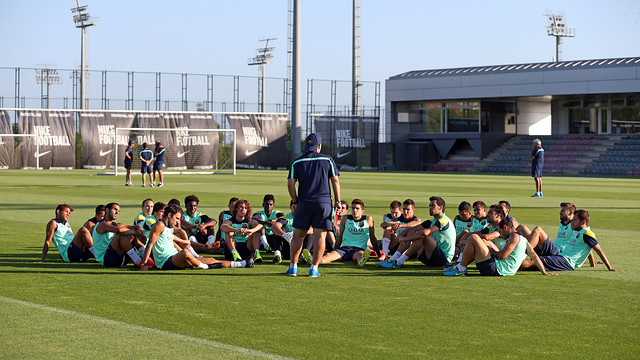 Gerardo Martino won’t be able to call on Adriano, who is suspended, and Sergi Roberto was not named to the squad for tomorrow’s showdown with Atlético Madrid

Barça completed its final training session ahead to tomorrow’s Spanish Super Cup showdown with Atlético Madrid. Gerardo Martino’s men, including Dani Alves, trained at the Ciutat Esportiva Joan Gamper this afternoon. The Brazilian right back missed yesterday’s session due to a knock he picked up on his left ankle.

Barça B’s Frank Bagnack and Jean Marie Dongou trained alongside their first team counterparts, while Carles Puyol trained apart from the group. It’s worth noting that the team will travel to Madrid on Wednesday at 11.00, they are expected to arrive an hour later.

To the Calderón with the Senyera

The FC Barcelona players will don the away kit for the first time in an official match tomorrow evening.