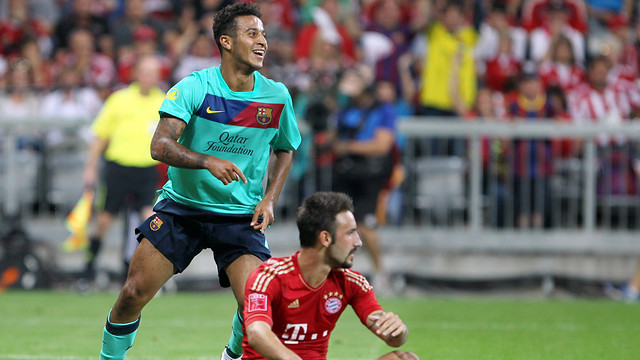 The agreement to sell the player includes a clause that stipulates both teams will play against each other in a friendly, the match will be played sometime in the next four years

FC Barcelona and Bayern Munich have agreed to terms for Thiago Alcántara. The German club will pay a fee of 25 million euros for the midfielder. The agreement also stipulates that a friendly will be played between the two teams in the next four years. The 22-year-old leaves the Blaugrana after playing for the first team for two seasons.

His career with Barça

Thiago Alcántara do Nascimiento, born in San Prieto Vernotico, Italy, started playing in FC Barcelona’s youth system at the age of 14, in 2005. After years in the Cadete and Juvenil teams, Thiago was promoted to the reserve side in the 2008/09 season, where he played a total of 25 matches. That same year, on May 17 of 2009, Thiago made his debut for the senior team, against Mallorca.

In the 2009/10 season, the midfielder played a total of 18 matches for Barça B, plus an additional two with the first team. In one of the games for the first team, against Racing Santander on February 20 of 2010, Thiago scored his first goal for the senior side. Barça won 4-0. The following season, 2010/11, Thiago played a total of 17 matches with the first team and 11 with the reserve side. Over the last three years, Thiago has helped the team win three Ligas, 1 Champions League and one Spanish Super Cup.

Thiago became a full time first team player in the 2011/12 season, with Pep Guardiola on the bench. The midfielder played a total of 45 matches that season, and he scored four goals. FC Barcelona won the European Super Cup, the Spanish Super Cup and the Club World Cup that year.

This past season, the player featured in fewer matches – 36 games, in which he scored 3 goals – mainly due to injury. He also helped the team win the 2012/13 Liga title.

Crucial for U21 Spain

Thiago has played a crucial role for Spain throughout his international career. His excellent performance in the latest U21 EURO Championship in 2013, where Spain claimed the title, saw the midfielder win the MVP of the tournament award. In addition to the U21 EURO, Thiago was also part of the championship-winning Spain sides that claimed the U17 EURO in 2009 and the U21 EURO in 2011.