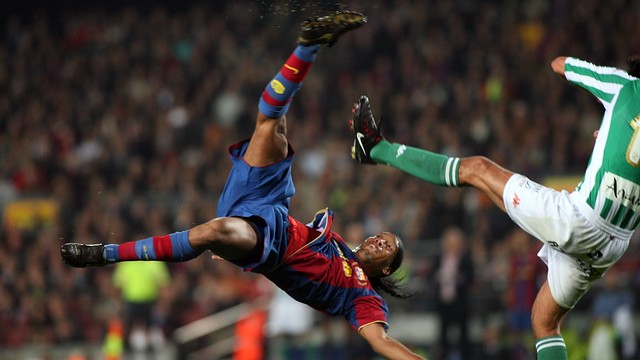 The Brazilian dazzled the world with incredible plays and stunning goals

During his time at FC Barcelona, Ronaldinho ability to successfully complete seemingly impossible plays and score legendary goals made him an instant favourite at the Camp Nou. Here’s an overview of the top ten goals scored by Ronaldinho for Barça:

The Brazilian scored his first goal in the Blaugrana strip in his second official match for the team, against Sevilla at 0.05 in the morning. After an unstoppable slalom, a shot from the player from 25 meters out found its way to the back of the net. Curiously, the seismographs at the Observatori Fabra registered a small tremor as the fans at the Camp Nou celebrated the goal.

Ronaldinho played a key role in Barça’s victory that night. A dream-like move from the Brazilian in the area of Osasuna on 76 minutes gave his team the 1-2 win in Pamplona.

In a Champions League group stage match, Ronaldinho stepped up to break the 1-1 deadlock. The Brazilian scored the match winner on the 89th minute from outside the area.

In the round of 16 of the Champions League, when Barça were losing by three goals after only 20 minutes of play at Stamford Bridge, Ronaldinho brought Barça to life with an exquisite strike that left the London team stunned.

Ronaldinho fired the ball into the roof of the net on 29 minutes in the match at Mestalla. After scooping up a cross from Belletti, he nailed a powerful right-footed shot that was unstoppable for Palop.

It was an unforgettable night for Ronaldinho and for Barça. The fans at the Santiago Bernabéu gave the Brazilian a standing ovation after he scored two jaw-dropping goals.

A work of art on the pitch of the Camp Nou. The artist, the Brazilian from Porto Alegre. After beating his defenders, the forward fired past Cech to give Barça the lead

A bicycle kick from ‘Ronnie’ closed out the 4-0 thumping of Villarreal. It was scored on the 88th minute after a cross from Xavi, the Brazilian controlled the ball with his chest and then pivoted before he finished off the play with an overhead kick.

The five-man wall stood between Ronaldinho and Werder Bremen’s goal, the Brazilian subtly shot the ball below the wall and into the back of the net. The goal was scored on the 13th minute of the match.

It was his last goal for FC Barcelona. The Brazilian scored from a bicycle kick, similar to the one he scored against Villarreal.