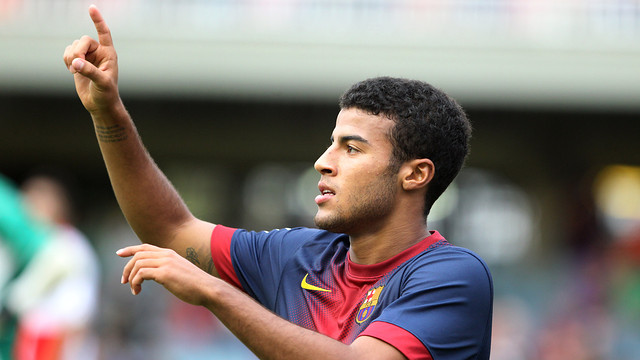 FC Barcelona and Celta have agreed to terms for the player Rafael Alcántara, who will join the Celestes for the 2013/14 season on loan

Rafael Alcántara, born on 12 March of 1993 in Sao Paulo (Brazil), will play under the managerial direction of Luis Enrique, Celta’s new manager. The midfielder, 20 years old, was one of Eusebio’s go-to men throughout the 2012/13 season, where he played a total of 36 matches in the league, 35 of which as a starter. He scored 10 goals for Barça B.

Rafinha joined FC Barcelona’s youth system at the age of 13. He made his first team debut on November 9 of 2011 against Hospitalet, in the away leg of the round of 32 of the Copa del Rey. In that season, 2011/12, he featured for the senior side three times. Last season he played one match for FC Barcelona, in the group stage of the Champions League against Benfica.

Rafinha extended his contract with FC Barcelona through 2016 on 4 July. Before the midfielder signed his new contract he showed his disposition to join another Primera team on loan in the hopes of enjoying more playing time in Spain’s top flight. At Celta, Rafinha will join up with former team-mates Fontàs and Nolito.