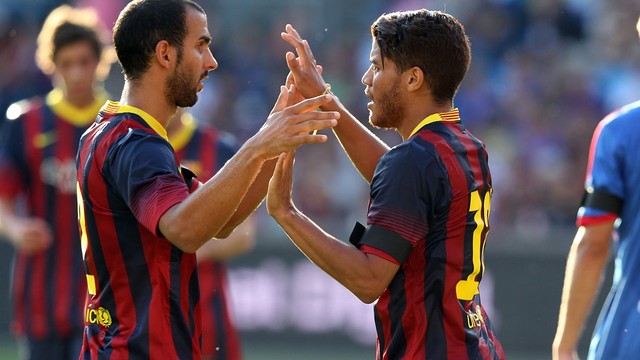 After the victory against Valerenga, the players evaluated their time in Munich and Oslo, and gave their impressions of the team’s new manager

After the match, Barça departed Norway for El Prat Airport. The team will arrive after a three and a half hour long flight.

The Blaugrana closed out their preseason tour of Munich and Oslo with a 0-7 drubbing of Valerenga this afternoon. Martín Montoya, who started both matches, said, “our sensations are good. The match against Bayern was a bit more complicated because they’ve been training longer than we have, but our evaluation of the matches are very positive.” When asked about the new FC Barcelona manager, Tata Martino, the defender said: “He’s given us a really good first impression. I’m sure we’ll all adapt well, things will work out great with Tata.”

The following are statements made by some of the FC Barcelona players after this afternoon’s match:

“I’m aware that there will be a lot of competition, but I’m confident in my possibilities. It motivates me.”

“I asked to keep the number 37 but I wasn’t allowed to keep it because it’s a reserve-side number. I’m hoping the number 20 brings me luck.”

“The new manager watched the game and we’ll see what happens in the next couple of weeks.”

“I think we played well today.”

“It feels good to score two goals with the first team, it’s special.”

“It was a great experience to get playing time with the senior side.”

“We played well, and you always learn from these experiences. We’re very satisfied.”

“Tata really surprised me. He greeted us one by one with a lot of affection. He was very attentive. We’re excited because we know that he’s a manager who likes to rely on young players.”