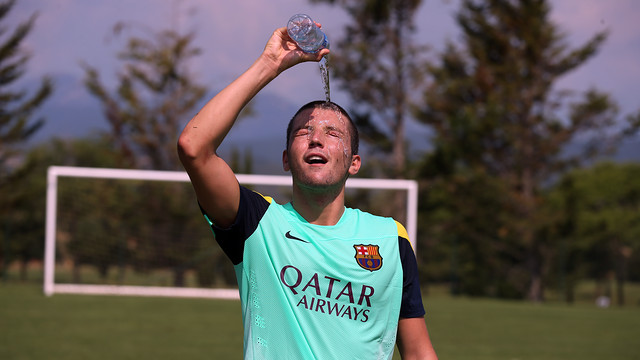 “Many players leave every year and we have to get used to that. The new players must try to do their jobs well,” says the Barça B captain

“I’ve only trained with the team twice, I’m still not used to all of this,” says Barça B’s newest signing, Dani Nieto

Barça B, currently in Torremirona (Navata, Girona), are training for the upcoming season. Ilie Sánchez, the team captain, talked to Barça TV and fcbarcelona.com about what he expects for the 2013/14 season.

“I’m always excited at the start of a new season and the new signings and the Juvenil players who were promoted are excited too,” said Ilie, who added, “we’re a dynamic and ambitious group of players. Eight to ten players leave the team each year and we have to get used to that.”

When asked about the team’s goals for next season, the captain noted that “playing for this team is very demanding, it takes a lot to be here and we all work hard. We’ll fight for a place high in the standings, we’re not placing any limits on ourselves.” Ilie went on to describe Dani Nieto – Barça B’s newest player – and his footballing qualities: “He’s young, he knows what it’s like to be in a team’s youth system and he’s an electric player, he’s a great dribbler. He’ll work hard.”

“I’m still not used to all of this”

Dani Nieto also talked to Barça TV after this morning’s session. “We’ll try to play the ball and finish strong,” said the 22-year-old. “I’ve only trained twice with the team and I’m still not used to all of this. I want to learn and if I can help the youngsters, I will,” said the Mallorca-born player.

What can Nieto bring to the team? “I’ve played in Segunda for two years, I’m skilled and I can take players on. Eusebio told me to do what I know how to do, that’s why I’m here,” said Nieto.