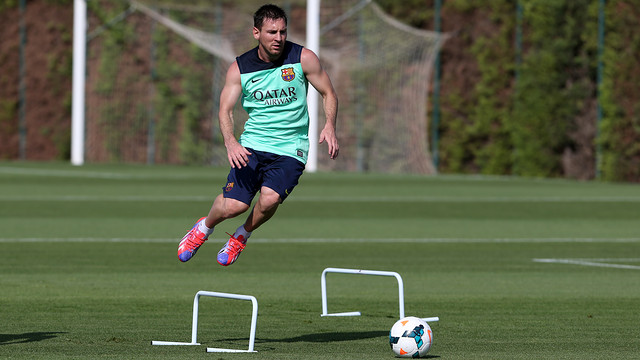 Carles Puyol and Ibrahim Afellay worked apart from the group, whilst Cuenca didn’t train due to injury

Cuenca out due to a cervical contusion

The Catalan player sustained a cervical contusion on Tuesday, and he’ll be under observation for the next 24 hours. Tests confirmed that the injury is not serious. When the player is given the all-clear, he will focus on recovering from the injury to his right knee.

The first double-session day for FC Barcelona is over. The first day of the 2013/14 preseason saw Tito Vilanova’s men complete two training sessions this Tuesday, the first at 9.00 and the second at 19.00. It’s worth noting that the Blaugrana will train twice a day through Friday.

In addition to the players mentioned above, three players – Puyol, Afellay and Cuenca – were also present but they were unable to participate with the group. The first two are recovering from their respective injuries and the third didn’t participate due to a cervical contusion. The next training session is scheduled for Wednesday, at 9.00, at the Ciutat Esportiva Joan Gamper.