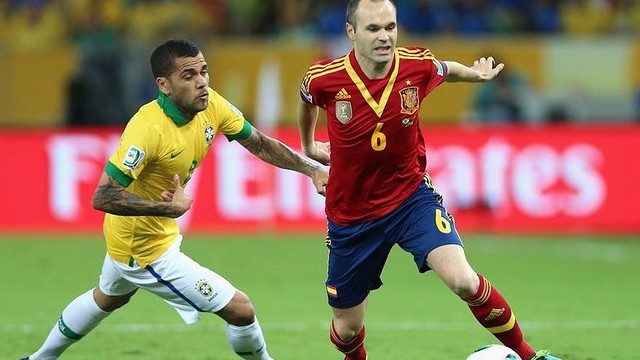 Dani Alves and Neymar Jr, played the most minutes out of all the Barça players in the Confederations Cup

Jordi Alba, Sergio Busquets and Andrés Iniesta all played a total of 390 minutes, second to Alves and Neymar

Here’s an individual look at all the Barça players who participated in the Confederations Cup:

Víctor Valdés (90 minutes): Del Bosque rotated his three goalkeepers in the group phase of the competition. The Barça keeper performed to perfection when he was called upon, in the match against Nigeria. He didn’t concede any goals in that match but he didn’t feature in any other games.

Dani Alves (450 minutes): He’s the only Barça player who participated in all possible matches. He was a permanent fixture in Scolari’s line-up, and he was a crucial player in Brazil’s defensive setup.

Gerard Piqué (367 minutes): He played alongside Sergio Ramos in the crux of the defence for Spain. His only break was against Tahiti, and he was ejected from the final against Brazil.

Jordi Alba (390 minutes): Like Piqué, he was a crucial player in Spain’s defensive line-up. He only missed the match against Tahiti and he played a huge part in the victory against Nigeria, where he scored two goals (0-3).

Sergio Busquets (390 minutes): The holding midfielder was an indispensable player for Del Bosque. He played every minute of the tournament, with the exception of the 90 minutes against Tahiti, and he played a pivotal role in commanding Spain’s defence.

Xavi Hernández (374 minutes): He was subbed out on the 74th minute against Uruguay, and he rested against Tahiti and, from then, he played against Nigeria, Italy and Brazil.

Cesc Fàbregas (374 minutes): He’s the only Barça player to not feature in a complete match in the Confederations Cup. He started against Uruguay (64 minutes), and he started on the bench against Tahiti (minute 22) and he started against Nigeria (minute 53), but he needed to be subbed out in the group phase. He didn’t feature for Spain for the rest of the tournament.

Iniesta (390 minutes): Along with Alba and Busquets, Iniesta was used player the most by Del Bosque. He only rested against Tahiti and he took ownership of Spain’s creative department throughout the competition. He was awarded the Silver Ball of the tournament.

Pedro (322 minutes): He scored the first goal against Uruguay (2-1), and the Canary Islander could have been the star of the final if he had netted against Brazil – a chance that was stopped cold by David Luiz off the line.

Villa (138 minutes): The Blaugrana scored three goals against Tahiti (10-0). He also enjoyed minutes against Nigeria and in the final, where he started from the bench.

Neymar Jr (410 minutes): The MVP of the tournament, Neymar became one of the standout player in each and every match of that he featured in. He scored against Japan, Mexico, Italy and Spain and he also was decisive in the semi-final against Uruguay. Only Alves played more minutes than Neymar out of all the Barça players in the Confederations Cup.