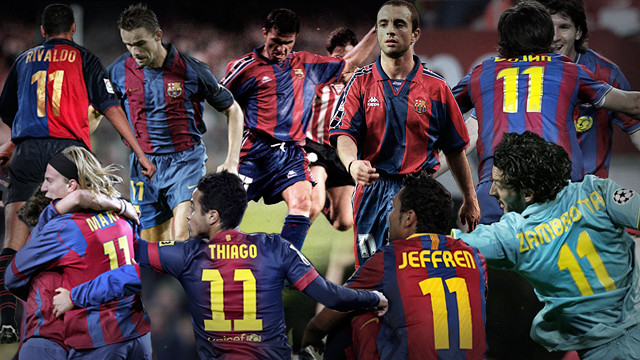 With the news that Neymar is to wear the number 11 shirt next season, we look at some of the recent Barça stars who’ve won the shirt.

Neymar da Silva Santos Júnior will wear the Barça number 11 shirt in the 2013/14 squad – just as he did with Santos and the various Brazilian national teams. The Brazilian will take over from Thiago Alcántara, who wore number 11 last season before he moved on to Bayern Munich. Before Neymar and Thiago though, there have been plenty of big name players in the number 11 shirt.

Since fixed shirt numbers for the squad were introduced into the Spanish top flight in the 1995/6 seaso, Hagi, Cuéllar, Rivaldo, Overmars, Maxi López, Zambrotta, Bojan, Jeffren and Thiago have worn the number 11 on their back. Before that, famous Barça players such as Txiki Begiristain and Sergi Barjuan wore the number 11.

Gica Hagi: In the 1995/6 season – when fixed squad numbers were established – the Romanian Gica Hagi was the first player to wear the number 11 shirt. Hagi was in his second season at the Club, after signing in the summer of 1994. In his two years at the Camp Nou, Hagi played 35 games, scoring 7 goals and winning a Spanish Super Cup winners medal.

Àngel Cuéllar: When Hagi left Barça, Àngel Cuéllar took over the number 11 shirt. Signed the year before from Betis, Cuellar was at the Club for two years and played a total of 56 games, scoring 9 goals. Cuellar suffered a serious knee injury in his first season and then under Bobby Robson, he won the Spanish Cup and Super Cup, as well as the European Cup Winners Cup.

Rivaldo: The next player to wear the shirt was perhaps the man who’s enjoyed most success in it -Rivaldo Vitor Borba Ferreira. The Brazilian wore the number 11 for his first three of his five seasons at the Club  – from 1997/98 to 1999/00. He later wore the number 10 shirt, but wearing 11 he played 149 games (of a total of 235), scoring 80 goals (out of 130 in all) and won the Ballon D’Or in 1999. Rivaldo became a real crowd favourite and one of the symbols of Barça at the turn of the century. During his five years at the Club he won two leagues, a European Super Cup, a Spanish Cup and a Catalan Cup.

Marc Overmars: The speedy Dutch winger came to Barça in the summer of 2000 from Arsenal and was handed the number 11 shirt, with Rivaldo taking Giovanni Silva’s number 10. He wore the number 11 for four seasons  – the player who has worn it for the most time so far.

Maxi López: The Argentinean joined Barça in the 2005 winter transfer window and took the number 11 shirt for the season and a half, the highlight of which was his brilliant goal against Chelsea in the first leg of the Champions League at the Camp Nou. He played a big role in Frank Rijkaard’s side and after winning both league and Champions League medals, he went out on loan to Mallorca.

Zambrotta: The Italian Gianluca Zambrotta became the first Barça defender to wear the number 11 shirt when he signed in July 2006. Zambrotta actually followed in the steps of Sergi Barjuan who also wore number 11 when he figured at left back. Zambrotta signed form Juventus and played at right back for two seasons, making 58 appearances and scoring 3 goals.

Bojan Krkic: The Catalan was the next player to wear the number 11 shirt, after Zambrotta left. After wearing number 27 in his first season, Bojan took the number 11 the next year, before claiming the number 9 shirt. He played 41 games in the number 11 shirt and scored 10 goals, winning 1 World Club Cup, 2 Champions Leagues, 3 leagues, 2 Spanish Super Cups, 1 European Super Cup and 1 Spanish Cup at the Club.

Jeffren Suárez: It was another home grown player who was the next player to wear the Barça number 11 shirt  – Jeffren Suárez. The Canary Islander came to the Club when he was 17 years old and played five seasons, making 35 appearances and scoring 3 goals. In his final year at the Club, he took possession of the number 11 shirt in his last season with Barça  – 2010/11. Wearing number 11, Jeffren scored his most memorable goal – the fifth in the 5-0 win against Real Madrid at the Camp Nou.