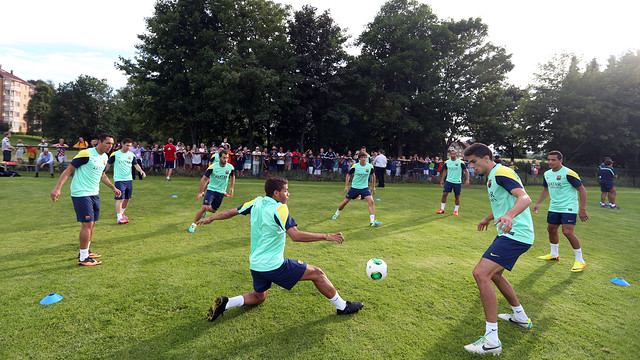 The Cameroonian stayed in the hotel gym doing specific exercises

First kit to be worn against Valerenga

Barça’s game against Valerenga will also be the first wearing the new 2013/14 first kit. In the preseason opener against Bayern Munich, they wore the new second strip, featuring the colours of the Catalan flag, while against Valerenga they’ll be donning their usual ‘blaugrana’ colours.

Barça have trained for the second time in Oslo. The session started at 19.00 in the Bislett Stadion, but ended on the secondary field called Valle, where the Valerenga first team usually train. The only absentee was Alex Song, who stayed in the hotel gymnasium doing specific exercises rather than join the rest of the team. The other 22 worked out normally with Jordi Roura and Rubi as they await the arrival of Gerardo ‘Tata’ Martino, the new Barça manager who should be landing in Norway very shortly.

Barça will play their second preseason friendly tomorrow Saturday at 19.00 against Valerenga in the Ullevaal Stadion. This morning the squad trained in front of 1,500 spectators who along with the match ticket were also given the chance to attend this special open-doors session.

The evening session, behind closed doors, followed the same rhythm as other sessions this week. Most of the focus was on fitness, although some exercises with the ball were also included.