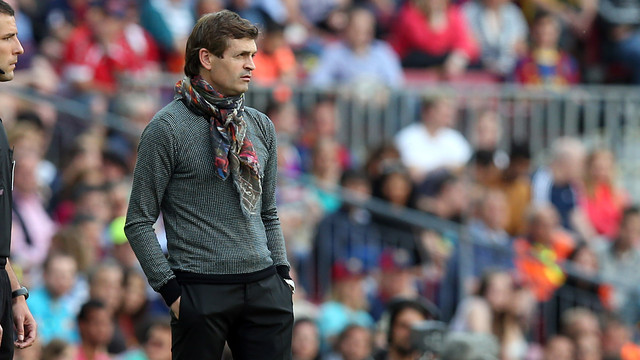 The FC Barcelona manager evaluated Barça’s season after this Saturday’s match against Málaga: “With everything we have overcome this year, we should be pleased with what we’ve done”

“Valdés made me understand that this wouldn’t be his last game with us, so we agreed that he wouldn’t start”, said the manager

Vilanova, on Abidal: “It was a very emotional couple of minutes. I wish him all the best”

Tito Vilanova explained the reason Víctor Valdés wasn’t named to the starting line-up this afternoon: “we’ve talked a couple of times this week and we agreed that he wouldn’t start this Saturday. He made me understand that this wouldn’t be his last game with us and, therefore, I thought it best to give other players some playing time seeing that we’ve already won the title.” He added: “I want Víctor to be happy. I’m very happy that he’ll stay on because that means our goal will be well defended. If he gets a chance to go elsewhere and be more happy, I’ll help him and we’ll get another keeper.”

Tito Vilanova talked to the press after this afternoon’s victory over Málaga. “We’ve happy that we got the 100 point record and that we broke the record for goals scored, but we’re also happy with the game we played this Saturday against Málaga.” He added: “it has been a very good season. There are records that we won’t be able to beak again, like being the league leaders from the first to the last week of the competition. After everything we’ve overcome this year, I think we need to be pleased with what we’ve done.”

When asked about the tribute to Éric Abidal, Vilanova was honest: “it was an emotional couple of minutes. It was hard to stay composed during certain moments. You’ll understand, from my perspective, I understand this a little better. I wish him all the best and I hope he’s happy.”

The Catalan manager then went on to talk about some of the players on his team. On Thiago and Tello he said that they are both important players to the team, both now and in the future. “We’d really like it if he stayed on next year. I have complete confidence in him, but it’s also his choice. He needs to know that the competition [to get into the starting line-up] is very strong,” said Vilanova when asked about Thiago. On the ovation David Villa received from the fans this Saturday when he was subbed off, Vilanova noted that “Villa is very loved by both the fans and his team-mates. I don’t think this Saturday was any different than other days.”

Lastly, Vilanova also had words for Perdo and Alexis and for the team in general: “Pedro’s overall performance has been good all year. Alexis has gained confidence and he did well in the last part of the season. With that said, I think we finished the season well.”