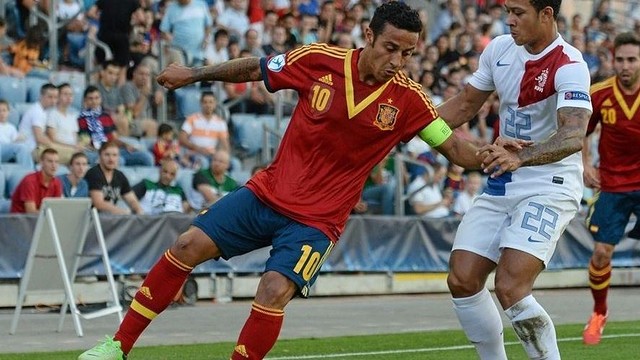 Goals from Morata, Isco and Álvaro Vázquez give Spain the win over The Netherlands, and they will face Norway in the next round

Thiago was the only FC Barcelona player named to the starting line-up, while Muniesa played the final minutes of the match

The U21 Spain team defeated The Netherlands by 0-3 this afternoon in Israel, which gives the Iberians the top spot of their group. Spain will face off in the semi-finals against a Norway, on Saturday at 18.00. Morata, Isco and Álvaro Vázquez were the goal scorers in a match that saw only two Blaugrana feature for Spain, Thiago (starter) and Muniesa (sub). Both Spain and The Netherlands had already qualified for the next round.

Spain took control of the match from the starting whistle. The Netherlands’ high pressure didn’t stop the men managed by Lopetegui from enjoying the best chances in the first half. On 23 minutes, Morata warned The Netherlands with a long-range shot and two minutes later he netted the opener after an assist from Sarabia. The Netherlands could have equalised through Van der Hoorn, but De Gea denied the Dutchman. Second later, Isco took advantage of a good pass from Muniaín to make it 2-0.

In the second half The Netherlands took the initiative. In dire need of a goal, they pinned Spain back with a couple of great chances that didn’t end up with the ball in the back of the net. The best chance came through a free kick taken from Depay, which was saved by De Gea. Spain could have killed the game off on 65 minutes, but the keeper Bizot did well to save the attempt. However, Spain did get their third when Sarabia linked up with Álvaro Vázquez, who fired to the back of the net.

Before that, on 79 minutes, the only FC Barcelona player named to the starting line-up, Thiago, left the pitch. Another Barça player came on in his stead, Marc Muniesa.