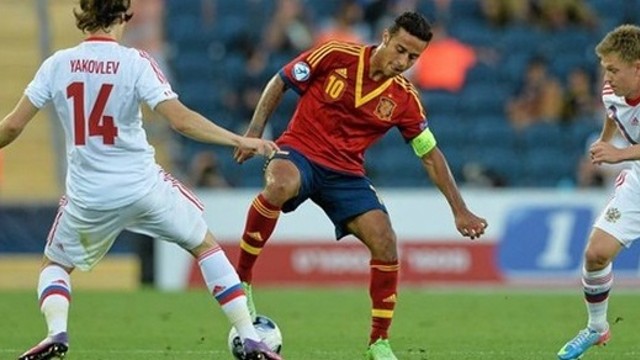 The team managed by Lopetegui, who named four FC Barcelona players to the starting line-up,

The U21 Spain team started their European Championship bid in Israel with a 1-0 victory over Russia this evening. Four FC Barcelona players (Montoya, Bartra, Thiago and Tello) nearly played the entire 90 minutes of regulation time. Thiago started the play that led to the match-winning goal, which was scored by Morata on 81 minutes.

The U21 team started off strong as the first three chances of the match were created by Barça players. First, Montoya nearly gave Spain the lead but his shot went just wide of goal (min 10), later Thiago’s free kick was saved by the keeper Zabolotnyi (min 18), and finally Tello’s shot hit the side netting of the goal  as the first half came to a close (min 37).

Just like in the first half, Spain didn’t want to settle for a draw. Rodrigo had two chances after two brilliant plays from Isco, but neither went in. However, on 81 minutes, Thiago served up a free kick which was headed in by Morata.